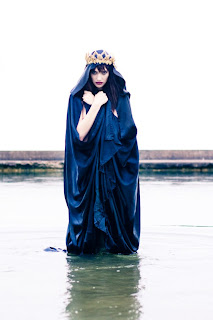 If I was doing the Pagan Name of the Year awards during 1976, Rhiannon would have won by a landslide.

Stevie Nicks discovered the name Rhiannon through the novel Triad by Mary Leader. Triad is about a woman named Branwen who is possessed by another woman named Rhiannon. Nicks thought that the name was beautiful and decided to write a song about it. Three months later, she joined Fleetwood Mac and "Rhiannon" became one of their greatest hits. The live performances of that song were way more intense than the studio recording, Mick Fleetwood described it as an exorcism. It wasn't until after she wrote the song that Nicks familiarized herself with the mythical Rhiannon. She was shocked to find that the lyrics she wrote correlated with the Welsh stories so perfectly.

Rhiannon (pronounced "ree-AH-non") is a Welsh name derived from the Celtic name Rigantona, meaning "great queen." Historians believe that Rhiannon was a local figure. Outside of Southwest Wales, Rhiannon was virtually unknown. She appears in a well known collection of Medieval Welsh stories called the Mabinogion, which contains most of what we know of Welsh mythology. Interestingly, there is no suggestion that Rhiannon is a goddess in these stories. She is shown as a mortal woman. Rigantona was a goddess in Celtic mythology, which makes people believe that she was a goddess to the Welsh as well. Also, Rhiannon is often associated with Epona, the Gallo-Roman goddess of horses. It is worth noting that the Mabinogion was written by Christians, so they might have been uncomfortable presenting her as a goddess.

Rhiannon's story begins when she goes against her fathers wishes and marries Pwyll instead of Gwawl. Soon they have a son together, but the boy disappears on the night of his birth when he is in the care of her ladies-in-waiting. They don't want to get into trouble, so they frame Rhiannon by smearing her in blood while she slept and accused her of cannibalism. Rhiannon is punished for seven years until her son reappears. The boy was named Pryderi. Eventually, Pwyll died and Rhiannon remarried to Manawydan, while Pryderi married Cigfa.

But at Rhiannon and Manawydan's wedding feast, a mysterious mist came through their kingdom. When it cleared, all the animals and people were gone except for Rhiannon, Manawydan, Pryderi, and Cigfa. They were forced to leave their barren land and travel to England as beggars. Years pass, and they decide to come back to Wales to see if the situation has improved. Pryderi and Rhiannon disappear (in some variations they're turned into donkeys, in another they are attached to a magical cauldron) leaving the remaining two to wonder were they are. Manawydan manages to grow some wheat but before they can benefit from it the crop is eaten by mice. Enraged, he caught one of the pests and was about to kill it when a passing stranger pleaded for it's life. The man promised that he would give Manawydan anything he wanted in return for the mouse's life. Manawydan wanted his wife and son-in-law back and the curse lifted. Both wishes were granted instantly. The stranger was the magician Llwyd, and the mouse was his wife. Llwyd was hired by his friend Gwawl to curse the four as revenge on Rhiannon.

In Neo-Paganism, Rhiannon is primarily a horse goddess because she first appears to Pwyll while riding a magnificent white horse. She is also seen as a queen of sovereignty. Pwyll was not royalty before she agreed to take him as her spouse. Aside from horses, Rhiannon has a strong association with birds. She has a magical set of them who can both sooth the living into a deep sleep and wake up the dead.

To the surprise of no one, Rhiannon first appeared in the American top 1,000 in the 1970s. It's highest ranking was in the 1980s at #598. It fell off the charts in 2008, but it remained popular in Scotland that year at #296. I've seen a few children of Neo-Pagan families with this name, although Rhiannon is not nearly as common as Tabitha and Rowan. There is also a well known Wiccan from Australia with this name, Rhiannon Ryall, who has made a lot of controversial claims in the past.

The issue I have with Rhiannon is that it's slightly cliche. It feels like it's in the same group as Raven, Willow, and Ember. It's a bit of a witchy stereotype. Rhianna was one of my favorites when I was younger, but that now has a hip-hop vibe to it thanks to Rihanna. Rihanna is the more popular option at the moment, it peaked in 2008 at #311 and is now at #729, and it's also very popular in Scotland and Canada. Other variants include Riannon, Rianna, Rhi, and Rhian.

Even though the name feels a bit obvious to me, it's still a lovely name for a Neo-Pagan family. And thanks to Stevie Nicks, it's one that everyone is familiar with and one that everyone associates with witches.