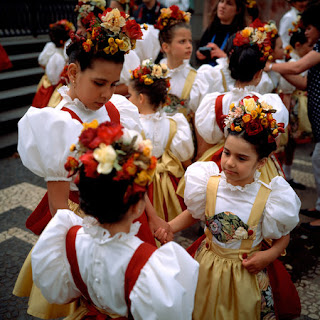 September is Pagan Pride Month! Hooray! Between September 15th to October 15th, it's National Hispanic Heritage Month! Double hooray! Time for my to show off my Puerto Ricanness.

Genealogy is very difficult when you are the descendant of immigrants. I have no ancestors born in America before 1900. As a result, most branches on my family tree cut off short. However, when my mother attempted to fill in the missing spots, she found a friendly distant cousin living in Puerto Rico who gave her an abundance of information. As a result, I know the names of my matriarchal lineage (the mother of my mother of my mother...you get the idea), back eight generations. As well as their siblings, significant others, and children.

So why am I writing about this? Because they have awesome names, of course! What blog did you think you were reading?

I know that my ancestors were only in Puerto Rico for one generation, and before that they were Spaniards. Before that? I'm not sure. I didn't expect to find so many German names on the Spanish side of my family, so that's curious.

Clotilde: From the Germanic name Chlotichilda, meaning "famous battle" or "famous in battle."

Fecita: I couldn't find a meaning for this name. The closest I could get was looking up the word fecit. It used to be inscribed on a work of artwork in the place of "by," for example: "Michaelangelo fecit" would mean "by Michaelangelo."

Fidelina: A variant of the Latin Fidelity, meaning "loyal." Sounds kind of prissy, doesn't it?

Hormen: Yes, this really is the woman's first name. I'm not sure where it comes from. My only guess is that it's a variant of Horman, an Anglo-Norman occupational surname in reference to a chief servant of a medieval household. Since it sounds a lot like "whore man," I don't think it's going to be appearing on the charts any time soon.

Leonor: A Spanish and Portuguese variant of Eleanor.  It could also be a variant of Leonora, a Greek name meaning "light."

Monserrate: The Portuguese variant of Monserrat, a Latin name meaning "jagged mountain." This is the name of both of my earliest female ancestors.

Niome: A...variant of...Naomi? I guess? I don't know for certain. She married into the family and went by "Dolly" which doesn't give me any clues.

Nydiarose: A lovely compound name bestowed to the grand daughter of Nydia.

Petronilda: I can't find anything about this name. There's Petronilla, a Late Roman feminine form of Petronius, meaning "yokel." Maybe they're related.

Ramona: A Spanish and Old German name meaning "protecting hands." There are two in the family, a mother and a daughter.

Dionizio: Spanish form of Dennis, both meaning "follower of Dionysius." Dionysius is the Greek god of wine, ecstasy, and ritual madness. There's two of them in the same generation and they're not blood relatives, so maybe it was a popular name back then.

Jose Marie: I was quite shocked at first to see that my fourth-great grandfathers were named Jose Marie and Jose Marias, but apparently this moniker is still very common in parts of Europe. Of course, Joseph and Mary were the names of Jesus' earthly parents.

Mariano: A Latin name meaning "manly." Could also possibly be related to Mars.

Nemesio: A Spanish name meaning "justice." Most likely related to Nemisis, the Greek goddess of revenge. He went by "Nessy."

Roque: A Spanish and Portuguese variant of Rocco. Rocco is an Italian and Germanic name meaning "rest."

Walberto: I couldn't find any information from sources that I trust. Others listed it as a Germanic name meaning "one who is in power." He was the husband of Hormen. There's a clunky combination if I ever heard one.

Pretty cool, huh? How about you guys? Do you have any gems on your family tree?

Website Note:  I apologize for the messiness of the spacing in recent posts. Blogger has redesigned the site and it's been a pain in the ass to get it right ever since. It'll look fine when I hit "publish" only to find that it arbitrarily added and deleted spaces which is annoying. So please bear with me.


Image Credit:
I believe I found it via http://www.youcantcallitit.com/
Posted by Isadora Vega at 9:56 AM