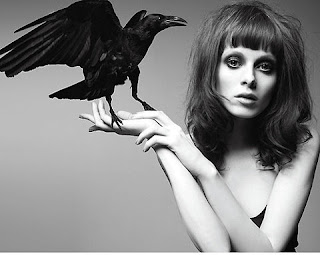 Here's something for the young Witchy fiction lovers out there: Smoky and the Feast of Mabon is a children's book by W. Lyon Martin with illustrations by Catherynne M. Valente. In it, a little girl named Smoky is sad because all her flowers are dying, and goes into the woods to find solace. There she meets Lady Equinox who teaches her about death and rebirth. Smoky is named for "the delicious scent of wood burning that heralds the coming of Autumn and Winter."

Technically, the correct spelling is Smokey (Smoky just looks odd to me). Smoke is associated with both fire and air, the two masculine elements. In Wicca, smoke is often used for purification. Practitioners take a bundle of magickal herbs, what types of herbs depend on what magick they want to accomplish, and then light one end on fire. They then waft the smoke around a person's s aura or throughout a room or building to erase negative energy. This process is called smudging.

Smokey was cast into the namescape by Smokey Robinson. Born William Robinson Jr., he is an American R&B singer. He was the lead singer in Motown's first band, The Miracles, and his consistent commercial success gave him the title of the "King of Motown." He was given the nickname when he was six or seven years old. "Smokey" is an old derogatory term for a Black person. Robinson has an unusually light skin tone for an African American, so his uncle called him "Smokey Joe" so that he would never forget that he was Black.

To be honest, I have no idea how a Black person would look at this name. In all the reading I've done about slaves and racism I've never seen the word used that way. But I've still noticed that all the people who bear this name seem to be Black. Even the Smoky in the Mabon book appears to have dark skin. Robinson's Uncle's attitude makes me think that it's used as a badge of pride now, but I'm not sure. So there's that challenge.

The other great American namesake is Smokey the Bear. For those of you who live outside the country, Smokey the Bear is the mascot of the United States Forest Service. He teaches children about fire prevention and safety. He was created when my grandparents were kids, in 1944. He's been on television commercials forever. Everyone knows him. And that might be standing in the way of this name being used more than the obscure-racist-slang association.

Smokey is a beautiful, unique nature name. But it might be a bit more challenging to wear than one would expect. Still, it has a comforting vibe. Like a campfire late at night.