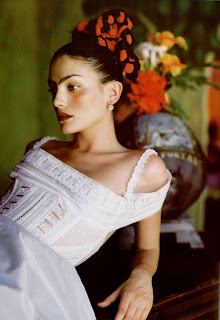 Frida Kahlo is my hero. When I was a little girl first showing my lifelong interest in art, my mother introduced me to the only two female artists she knew: Frida Kahlo and Georgia O'Keefe.I never really got Georgia O'Keefe, but Frida had a story.
It's impossible for me to try to summarize her life, but I'll try to explain why people love her so much because I'm sure some people will roll their eyes and say, "Oh, she's one of those," when they read that. I guess Frida is one of those hipster (whatever that means) figures that people say they like because...they think it makes them look cool? It won't make you look cool with the normal crowd, most people (not my friends) I knew said, "Ew!" whenever I brought her up.

But Frida was a bad-ass woman. After the horrific trolley accident that left her in pain for life, she didn't cry or complain. When her lifelong love Diego Rivera cheated on her (multiple times) she had lovers herself. She wasn't conventionally pretty, and yet she's a fashion icon in her own right. She didn't follow anyone else's rules for what was cool or fashionable. Someone once said to me, "But she didn't have any painting ability, she just had a good story." I think she had great painting ability, she just wasn't interested in what the establishment thought was great. Her work was very influenced by folk art, so as a result her work isn't very fussy. She had low tolerance for insincerity, in one letter talking about European surrealists she wrote, "They are so damn 'intellectual' and rotten that I can't stand them anymore...I would rather sit on the floor in the market of Toluca and sell tortillas, than have anything to do with those 'artistic' bitches of Paris."

Another great quote of hers, “I used to think I was the strangest person in the world but then I thought there are so many people in the world, there must be someone just like me who feels bizarre and flawed in the same ways I do. I would imagine her, and imagine that she must be out there thinking of me too. Well, I hope that if you are out there and read this and know that, yes, it's true I'm here, and I'm just as strange as you.” That right there is why I love her.

One day my father said to me, "I've been thinking...Frida Kahlo's father was a German Jew, right?"

"And his name was Kahlo? That doesn't sound right."

So it was research time. As it turns out, Frida's father was originally named Wilhelm Kahl, but changed it to Guillermo Kahlo in order to sound more Mexican when he immigrated to the country. Kahl is an Middle High German surname that's derived from kal, meaning "bald." Not a particularly flattering etymology, I admit. But Frida's life puts it in a new light.

I thought I was really clever thinking of Kahlo ( which is, by the way, pronounced "KAH-low," not "KAY-low" you gringos) for a potential daughter, but it looks like someone on Ohdeedoh beat me to it. One of the modern design lover's sons is Kahlo Roel. Oh well. You can't be the only person on the planet with a name. Still, it's a unique hero name that I yearn to use one day.