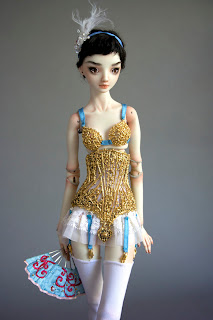 It seems like yesterday when we were under the sign of Leo, but it's already time to profile Virgo.

The sun sign of Virgo occurs between August 23rd to September 23rd. As you could probably guess, Virgo is Latin for "virgin." I've once called Virgo the Neo-Pagan version of Chastity. I still think that any name that connotes celibacy is...icky, for lack of a better term. However, after researching it, it appears that the mythology surrounding this constellation has more to do with the harvest.

Virgo is the second largest constellation in the night sky. The Greeks and Romans believed that the constellation was Demeter/Ceres, the goddess of fertility and the harvest. She is obviously not a virgin, since she is the mother of Persephone. The constellation's coincidence with the harvest time is not serendipitous. Virgo is believed to be carrying two sheaves of wheat.

But this is not the only interpretation. The Babylonians called this constellation The Furrow, and it represented the goddess Shala's ear of corn. The brightest star in Virgo, Spica, retains this tradition. Spica means "ear of grain." During the Middle Ages, Virgo was often believed to be the Virgin Mary.

Virgo is also believed to symbolize Erigone. In Roman mythology, Erigone was the daughter of Icarius. Dionysius, the god of wine, gave Icarius the secret of wine making. Armed with this knowledge, Iracius made a happy life for him and his family until he was killed by peasants who believed that they were poisoned by his product. Erigone was lead to her father's corpse by the family dog. When she found him, she hung herself in grief. It is important to note that this time of year would have been the time when grapes were harvested. The first century astrologer Marcus Manilius referred to this constellation by the name Erigone.

Virgo is ruled by the element of earth and is therefore feminine. People born under this sign are known for being exacting and eloquent, modest and human. They have a very analytical nature and have a tendency to over think things. They aren't collectors, they like to keep their lives at the bare essentials. They are the Hermione's of the astrological world, in other words.

In other words, the virgin association should not be taken so literally. I take back my prejudice. Virgo's not icky at all. Virgo's actually okay. It fits in with Shiloh and Juno nicely. Virgo could actually be cute.