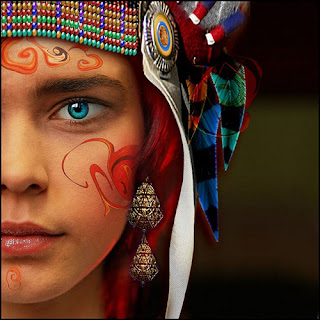 Here's a name that has a strong artsy, hippy, and New Age vibe.
Indigo (pronounced "IN-dih-goh") is a color name that refers to a deep purplish-blue. It is ultimately derived from the Greek word indikon, meaning "from India." This is because this color dye originally could only be found in India, and it's a color still heavily associated with the country today. This blue dye was created from a genus of plants called indigofera which grows in the Asian tropics.

Indigo is well known for being one of the traditional colors of the rainbow. Isaac Newton first introduced indigo as a spectral color, which he found by shining a light through a prism to create a rainbow-like band of colors on the wall. In yoga practice, this color represents the sixth chakra. This chakra is positioned on the third eye and is in control of intuition.

This color is also in the center of a somewhat controversial belief. In the Neo-Pagan world, the claim that people can see auras is a common one. They way they describe it, auras are colorful radiations that surrounds people or objects of power. In the 1970s, a parapsychologist named Nancy Ann Tappe claimed to notice that several children were being born with indigo auras. Descriptions of these so-called "indigo children" include characteristics such as independence, curiosity, stubbornness, empathy, and an interest in spiritual matters. I find this whole thing ridiculous because that pretty much describes all children before materialistic pop culture digs their grimy little claws into them. And aren't all auras supposed to be special in their own way?

Although unisex, Indigo is a name often associated with girls because of the folk music duo known as the Indigo Girls. The band is well known for songs like "Galileo" and "Closer to Fine." Both Amy Ray and Emily Saliers identify as lesbians, and they continue to be active in environmental and political causes. Despite that, Indigo could very easily be used for both genders as it has never charted for either.

I would imagine that a family with someone named Indigo would be a creative one because that's the stereotype. The name is a bit of a hippy cliche, but that doesn't stop it from being cool. Indigo is a name with great mysticism attached to it, and for that it's perfectly witchy.