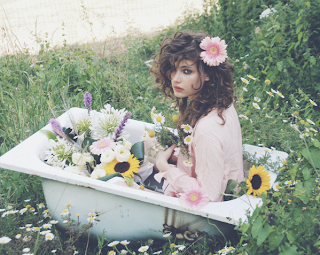 Primeveire was one of those names that captured my heart from the get go. There was only one problem: I couldn't find out what it meant.

I came across Primeveire randomly. I was looking up Medieval baby names both for this blog and for my own amusement, when found a website that listed popular monikers taken from legal documents from the Anglo-Norman period of England. This time in history had a great variety of names that are obscure today. Primeveire is one of them. When I first saw it, I thought, "Mine!"

Being the Italian/Puerto Rican that I am, I immediately assumed that Primeveire meant "springtime," because of Primavera. Primavera itself has never been a popular name in the United States either, but it is more familiar than Primeveire. But Primavera doesn't have quite the same impact. It's lovely, but a bit too "light" for my tastes. The best witchy name should have a bit more shade to it, I think. Primeveire has that shade. I assume it's pronounced "PREEM-ah-vair," because that's how I've been saying it.

So I've been keeping Primeveire in my little desk drawer inside my head, only to take it out on occasion to gaze at it lovingly. Over time, a little voice inside of me said, "You can never use this name if you don't know what it means. Remember, you thought Musetta had something to do with the Muses before you researched it." (Musetta means "little bagpipe.") I mean, I'm supposed to be all about naming intentionally. I can't really pick a name just because it sounds nice, can I?

And then, stalking other baby name blogs paid off! According to a post about flowers in other languages by British Baby Names, Primeveire is French for "primrose." Primrose as a name has been gaining some attention, I've seen it in some birth notices from Britain in particular. Could Primeveire be an alternative?

Part of me has an irrational fear of my favorite name suddenly becoming enormously popular (hey, it's happening with Penelope!), but I'm sharing the very obscure name that I have insane love for because I care about you readers. Just use it only after I use it. That's reasonable, right? ...Right?