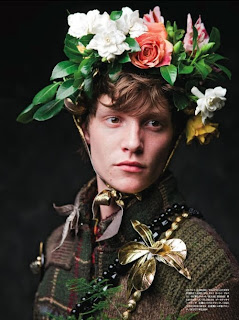 Blessed Beltane to all my witchy friends today! For those that don't celebrate it, allow me to educate you.

Beltane (pronounced "BEL-tayn") comes from the Celtic God Bel, meaning "bright one," and the Gaelic word teine, meaning "fire." So the name roughly means "bright fire." The holiday of Beltane takes place on May 1st if you live in the Northern Hemisphere. Variations of this holiday go all the way back to Ancient Egypt.

Beltane is the time of year in which the God and the Goddess get married. This is why it's bad luck to get married in the month of May, you don't want to upstage the God and Goddess. But it's still a time to celebrate love, partnership, and fertility. It's Christian counterpart is May Day, which is not really a holiday here in the United States, but I know that it is still observed in Europe.

Beltane is arguably the most important Wiccan holiday aside from Samhain. It's celebrated in a variety of ways. Like Yule, it's a gift giving holiday. There are also Beltane fires, which participants must leap over in order to cleanse themselves of evil spirits, and lots of dancing around the fire as well. People hang rowan branches on their doors for protection, because this is the day in which faeries and spirits are especially active.

I'm not going to lie, there's a lot of sexual imagery in Beltane traditions. For instance, the maypole. The pole itself represents the God and his virility. The ribbons are the Goddess. The ribbons entwining the pole symbolize their union. There's also an old tradition called Great Rite. A May Queen/Maiden and a Green Man/Robin are selected at random amongst the participants, or sometimes they're the High Priest and High Priestess, in order to embody the God and the Goddess. They join together sexually as an act of worship. In front of everyone else. To be honest, I don't think that it's practiced much anymore. Traditional Gardenerian-type covens might still do it, but it's kept very hush-hush. However, couples might like to do a variation of it in the privacy of their own homes. They might also practice a "greenwood marriage" or go "a-maying," in which the couple stays up all night collecting flowering hawthorn, watch the sunrise together, and make love in the forest.

Babies born on (and I imagine conceived on, although no source has mentioned that) Beltane are considered very lucky. So it would make sense to give them names that celebrate it. Beltane is a masculine name that could also be spelled Beltine, Beltain, or Bealtaine. It's a powerful name for a lucky little boy.