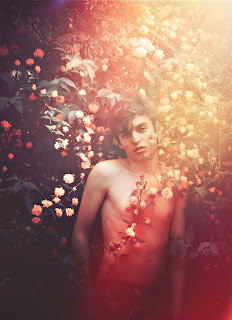 The end of springtime is fast approaching. With the seasons now in flux, it's time to profile this god of growth.

Vertumnus (pronounced "ver-TUM-nus") is derived from the Latin vertere meaning "to change." In Roman mythology, he is the god of change, the seasons, and plant growth. Some sources are convinced that he was originally an extremely important Etruscan god. The Etruscans lived along the northwest coast of Italy and had a distinct culture and language older and separate from the Ancient Romans. They called this god Voltumna. He obviously has nothing to do with the pantheon adopted from the Greeks, they're all either siblings or children of each other. Vertumnus is not in the "family." He is uniquely Italian.

Vertumnus' cult arrived in Rome around 300 BC. There was a temple dedicated to him, which had a bronze statue made in his likeness that was decorated in accordance with the seasons. His feast day, Vertumnalia, was celebrated on August 13th.

The most well known myth regarding Vertumnus is the one that involves Pomona. Pomona was the goddess of fruit and abundance. Vertumnus fell in love with her, but she was a committed virgin. He disguised himself as an old woman in order to walk into her orchard, and then told her a story that warned her of the dangers of turning down a suitor. Eventually, she married Vertumnus. This story appeared in Ovid's Metamorphosis. This story was used as an inspiration to many works of art and variant retellings, many of which are quite erotic. My favorite is the one in the play by Mary Zimmerman, when Vetumnus finishes telling the story, Pomona looks at him and says, "Why are you wearing that ridiculous wig?"

I could not find any instances in which this name was used as a given name for a person. This is partially because he's not a very popular god anymore and people are unfamiliar with the name. Maybe some parents find it unwieldy, although it doesn't really have a lot of syllables. I personally quite like the French variation, Vertumne, but that doesn't seem to be used as a name outside of restaurants and flower shops.

Why not consider it, though? Vertumnus seems like a nice enough god, Roman god names are popping up on the top 1,000 these days, why not honor him by using his name? I'd love to meet a little Vertie.