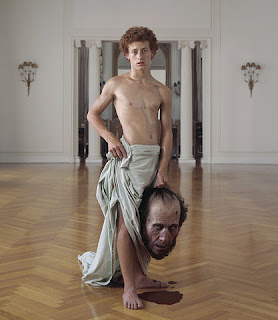 I've got three word for you: "RELEASE THE KRACKEN!"

The story of Perseus begins at his conception. The King of Argos received a prophecy that he would be killed by his daughter's son. In order to keep his only daughter, Danae, childless, he imprisoned her in a bronze chamber. This was not a brilliant plan. Zeus was drawn to Danae. He took the form of a shower of gold and impregnated her. The baby boy was named Perseus. The King knew that he needed to get rid of them, but couldn't kill them for fear of being punished by the gods. So he locked them both in a chest and threw it into the sea. The two washed up on the island of Seriphos and was found by the fisherman Dictys.

Dictys was brother to Polydectes, the king of the island. Polydectes also wanted Danae, but Perseus constantly protected his mother. Polydectes got annoyed, and created a plan that would get rid of Perseus once and for all. He held a large banquet in which all of the guests would be expected to give him a horse, knowing that Perseus could not give such a gift. Perseus asked Polydectes what else he would like. Polydectes demanded the head of Medusa, the gorgon who turned men to stone with one look.

Perseus got lots of gifts from various mythical beings that helped him complete this quest. By only viewing Medusa in the reflection of his polished shield, he was able to cut off her head. In a separate adventure, Perseus saves the princess that would become his wife. Her mother, Casseopia, had been foolish enough to boast that her beauty was equal to the Nereids. This enraged Poseidon, who released a sea serpent upon the kingdom. The monster would only stop if Andromeda was given to him, so she was tied up on a rock by the shore. Perseus slayed the sea monster. Eventually Perseus was placed in the night sky in the form of a constellation.

These two stories are what make up the 1981 film Clash of the Titans. It was the last work of legendary stop motion visual effects artist Ray Harryhausen. It's pretty campy fare, but it is still wildly enjoyable and I was amazed at how much I liked it. While it was hard not to like the old Clash of the Titans, it's hard not to get bored during the new Clash of the Titans. I get annoyed when Hollywood changes a Pagan story in order to reflect Christian ideas. Stay with me on this. When they remade this movie they decided to add Hades into the mix (why, I don't know, it's not like Hades to get involved in the affairs of the living). And Hollywood always feels the need to make the "ugly" deities, the ones involved with death or destruction, evil. Because the fight against "good" and "evil," "light" and "dark," is an Abrahamic obsession. I've actually read sources on mythology in which the authors state that Greek and Roman myths are all about the "eternal struggle between good and evil." These people have more nerve than brains. Pretty much no deity is perfect in the Neo-Pagan religions.

Perseus has never been a common name in the United States. This name has something in common with Percival: they can both be shortened to Percy. For example, in Percy Jackson and the Lightening Thief, Percy's full name is Perseus. I think it could potentially be used by more people in this country, since other names from mythology are doing very well in the charts. Perseus has potential.