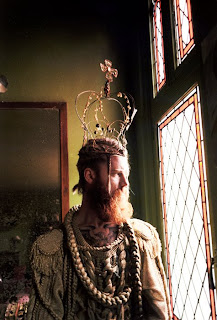 If you had to pick just one Shakespeare tragedy that is part of the lexicon of Neo-Pagan theater it would not be Hamlet. It would definitely be Macbeth.

Those with a passing familiarity of Scottish names should be able to figure out pretty quickly that Macbeth is a "son of" name. More specifically it's an Anglicized form of the Old Gaelic MacBeatha, which means "son of life." It started out as a first name, then gradually became a surname once the government introduced personal taxation.

I have a soft spot in my heart for Macbeth, as I played one of "The Three" in a college production. I'm sure most people are familiar with the story, but I'll recap it here just in case. Macbeth is a thane (kind of like a knight) at the beginning of the play when he receives a prophecy from three witches that says that he will be king. After that, he becomes afraid that his position is in jeopardy and kills more and more people including his best friend Banqou and Mcduff's wife and children. He is eventually slain by Macduff. It's worth noticing that his wife Lady Macbeth is sometimes considered to be a "witch" character also. Which makes sense if you think about the type of women who were often charged with witchcraft, they were women who were in some position of power, or women who lived alone and owned property.

Unfortunately, this name is famous for having a curse attached to it. You are not supposed to say Macbeth in a theater unless it's a part of the script. Any other time you're supposed to refer to it indirectly like saying "The Scottish Play" or "The Scottish King." If you do say the name, you are supposed to leave the theater immediately, turn in a circle three times, spit over your shoulder, and shout an obscenity. Then you have to wait to be brought back into the building. Having been in the theater world, I have met both people who believed in the curse 100% and people who thought it was a bunch of nonsense. I've even met someone who was horrified when I said the name in casual conversation.

Macbeth was written during a time in which the existence of witches was pretty much regarded as a fact. It is believed that Shakespeare used the spells of real witches, who became angry and cursed the play. But when a modern-day Witch tried to reverse the curse she failed. I have another theory. The play is based on a real life monarch named Macbeth that lived during the 1000s. He was known as Macbeth the Usurper because, exactly like the play, he became king after slaying the prior king, who was indeed named Duncan. He only ruled for under twenty years, but he was apparently a very good king. Perhaps Macbeth doesn't like his good name being smeared like that. So whenever he hears his name said in a theater he makes bad things happen.

It's a shame that this name is so tainted. The meaning in particular is very beautiful. In an alternate world it could have fit in nicely with modern name trends. Scottish and Irish surnames are a popular source for boy's names in America. And for a girl, it's just Mackenzie and Elizabeth smooshed together, right? But, alas, it's not meant to be. If I met a little Macbeth, I would be very surprised.