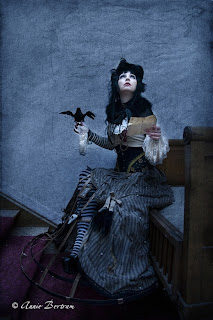 For my last entry into my Neo-Pagan movie theme, I'm going to cover the name Lennox and how Paganism shows up in more coded ways.

Lennox (pronounced "LEHN-iks") is a Scottish and English place name derived from the Gaelic leamhanach, meaning "elm grove." There is actually some variation to the original source of Lennox depending on what reference you're looking at, but it seems like no matter what it has something to do with elm trees. It was the surname of an influential aristocratic Scottish landowning family during the 1500s.

The first time I, and probably a lot of other girls, came into contact with this name was in The Secret Garden by Frances Hodgson Burnett. In the book, Mary Lennox is an angry little girl who is constantly ignored by her parents. The parents die from cholera, and Mary gets shipped off from India to England. She settles into the creepy mansion of her absent uncle, Archibald Craven, by wondering around a secret garden. The garden used to belong to her aunt, but since she died no one took care of it. Mary's demeanor gradually improves as she becomes friends with Dickon and Colin, who is Archibald's bedridden son, and she nurses the garden back into it's former glory. I actually loved the Broadway musical more than the book.

So you might be thinking, "What's so Pagan about that?" Watch the movie version that came out in 1993. There is one scene that really stands out to a Neo-Pagan audience. The children get together and cast a spell around a fire in order to bring Archibald back home. I can't remember exactly, but I'm pretty sure that wasn't in the book. I think Mary just wrote him a letter. That's how it goes in the musical anyways. That's beside the very general Pagan springtime themes of healing and renewal. I've seen many Neo-Pagans online bemoaning the lack of Pagan friendly material in popular culture, and there's some truth to that. But you cannot keep Paganism out of the movies. That would be like keeping it out of all culture in general. If you dig deeper, you can find some hidden treasures.

The first time Lennox showed up on the top 1,000 was in 2010 at number #933 for boys. I would be very surprised if it wasn't in the charts for 2011 as well. Surnames, and in particular Scottish/Irish/English surnames, are in vogue for boys at the moment. Plus, it falls in line with other names that end in "x" like Knox and Rex, which are becoming increasingly popular. I can also see this being picked up by the girls as well. Not only because surnames are fashionable for girls too, but because of The Secret Garden.

Lennox is a very current choice. I would expect to see many more children with this name in the coming years.