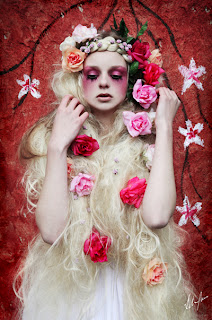 This unusual botanical name is almost always listed as a "witch's name" and there's a good reason why.

Eglantine (pronounced "EHG-lan-teen") is generally accepted as a fancy word for rose, which isn't completely true. It's actually another word for a sweet brier, which is technically a species of rose but it doesn't have the typical rose look. They almost look more like little pink daisies on a bush. Eglantine is a French name derived from the Latin aquilentus meaning "thorny" or "rich with prickles." They are native to Europe and West Asia and are considered an invasive species elsewhere. I couldn't find much about this plant's magickal uses, all everyone says is that it's for "pleasure" which is rather vague.

The first person to use Eglantine (in the form of Eglentyne) as a first name was Geoffrey Chaucer, who gave it to a character in The Canterbury Tales. She appears in "The Prioress's Tale" and she is a nun. She is described as gentle and soft-spoken, and it suggests that she joined the clergy in order to raise her social status. What happens in The Canterbury Tales is that all of these travelers have a story telling contest. Unfortunately, the story Eglentyne tells is anti-Semitic, which would not have been uncommon during that time but is still pretty unsavory.

But the Eglantine that's of more interest to Neo-Pagans in the one in Bedknobs and Broomsticks. In a pretty obvious attempt to repeat the success of Mary Poppins, Disney adapted the books The Magic Bedknob; or How to Become a Witch in Ten Easy Lessons and Bonfires and Broomsticks written by English author Mary Norton. The story takes place in Britain during World War II. Three siblings are sent away from their home in London and into the countryside in order to keep them safe from the bombings. The children are thrust upon Eglantine Price (played by Angela Lansbury) who thinks that they are going to be a nuisance. Eglantine is secretly studying witchcraft as a means to protect the country from the Nazis, but is only an apprentice witch. The children very quickly find out and Eglantine is forced to take them with her on her various adventures.

One of the reasons why Neo-Pagans love this movie so much (aside from the positive witch portrayal) is that there is a real Pagan in-joke going on here. According to legend, the New Forest coven gathered together in a forest on Lammas night 1940 in order to perform a ritual known as Operation Cone of Power. The purpose of the cone of power was to send the message into the mind of German leaders that they could not cross the English Channel. Gerald Gardner claimed he was there, which is how we know this. But I doubt that there is any way to prove that this meeting actually took place.

But back to Eglantine. It has never been a common name in the United States. I have to admit that the sound is a bit clunky. Not that that's a bad thing. I think it would appeal to Renaissance Fair folks in particular. It's an interesting option for those that like Medieval names.

Image Credit:
Her deviantart account has been deactivated, but the artist was felicefawn.
Posted by Isadora Vega at 3:04 PM