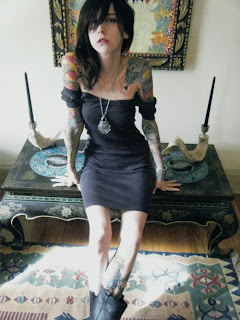 So it's time to mix things up a bit. Last year I participated in a Pagan Blog Party in which I profiled lots of names atached to fictional witches. I'm going to do something slightly different this time. This theme is inspired by The Celluloid Closet, a documentary/book about how gays and lesbians have been portrayed in Hollywood movies that I am slightly obsessed with. For the next two weeks I'll glen names from mostly movies but also television, plays, and books that say something about how Witches, Neo-Pagans, and Neo-Paganism have been portrayed throughout the years.

Gillian (pronounced either "JIL-ee-an" or "GIL-ee-an") is a variant of Julian that emerged during the 16th century that was given to children of both sexes. Nowadays, it's much more associated with girls. It first appeared on the American top 1,000 in the 1970s and peaked in 2003 at #467. It fell off the charts pretty quickly after that, and I'm really not sure why. It's a perfectly lovely name.

So the name was not fashionable when Bell, Book, and Candle came out in 1958. The movie's heroine is a witch named Gillian Holroyd played by Kim Novak. She's a spunky, free-spirited lady who has a familiar (a siamese cat named Pyewacket) and a fondness for walking around barefoot. She has a crush on her neighbor Shep Henderson played by Jimmy Stewart. But Shep is about to marry an old college enemy of hers, so Gillian casts a love spell on him. They get together and Gillian falls in love with him as well. Then Shep meets an author who is in the middle of writing a book about witches living in New York. This author is collaborating with a wizard named Nicky, who is Gillian's brother. Gillian uses magic to make Shep loose interest in the project and confesses her identity. The two quarrel, and Shep leaves her heartbroken. Months later, Shep returns to find Gillian powerless, because witches who fall in love loose their magic. The two get back together.

Something interesting happened to witch characters during the 1950s and 1960s. They became a symbol for how women were treated during that time. The message behind a woman loosing her power once she has a boyfriend should not be lost on anyone. Bewitched had a similar motif. While Samantha never lost her ability to do magic, she constantly felt the need to repress it. People are frightened of witches because they are powerful women. That's why these types of depictions were so popular. These witches threatened nobody because they conformed.

Bell, Book, and Candle is kind of a cult film for the Neo-Pagan community. I think we're inclined to see the humor in this campy romantic comedy. And it gives the name Gillian more Witchy cred, not that it didn't have any before but now it's more obvious.

Gillian is a bit more exciting than Jill while still being familiar. Perhaps it might be seen as passe since it's peak was not that long ago, but Gillian is more of a classic than, say, Skylar. I can totally see someone looking for a Witchy but not obvious name being drawn to Gillian.