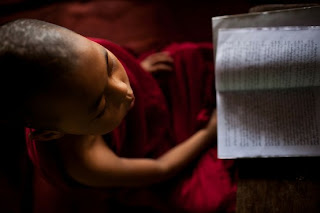 Sorry for the hiatus, I was spending time with a visiting friend and therefore wasn't paying attention to this blog. I've seen a few children named Tibet here and there. This name is surprisingly multi-faceted.

Tibet also proves that when it comes to names, there is not much that's new under the sun. Tibet (I believe it's pronounced "TIH-beht" in this case) was actually quite popular during the Middle Ages. It was a nickname for Theobald, an Old German masculine name meaning "brave people." But it didn't stay that way. The trendy sound of femininity at the time included names that ended with "-ot" or "-et." So it didn't take long for Tibet to switch sides. After 1300, Tib, Tibbot, and Tibet was considered the sole property of the girls. Until it faded into obscurity altogether.

As the name would suggest, the country of Tibet (pronounced "tih-BEHT") is quite mountainous. It is, in fact, the highest region on earth. The country has a turbulent history, in various time periods it was split up and under the rule of the Mongols or Chinese. Tibet's architecture reflects the influence of neighboring India and China.

The country's main religion is Tibetan Buddhism, and is famous for it's Dalai Lama.The Dalai Lama is a spiritual and political leader who is believed to be the reincarnation of a long line of gurus as well as the manifestations of Avalokitesvara, the Bodhisattva of compassion. The line started with Gendun Drup, who lived during the 1300-1400s. In the 1500s, a Mongol ruler coined the term "Dalai Lama," which is a Mongolian translation of the name of the third reincarnation, Sonam Gyatso (and if you're an Avatar: The Last Airbender fan, you're laughing). Soman means "merit" and Gyatso means "ocean." The Dalai Lama living in exile today is the 14th. He believes that the institution of the Dalai Lama may be abolished in the future, and that the 15th in line may be born outside of Tibet and will probably be a female.

But the Tibet that most of us have in our minds is quickly disappearing. After a military conflict in 1951, Tibet was incorporated into The People's Republic of China. Because the Chinese government has a "all religion is bad" policy, they've been trying to crush the spirituality that exists in the region. This has been a major source of tension. As a result this name could be seen as a political statement, which might become problematic in the future. People who openly support a free Tibet are often banned from China.

I don't dislike the name Tibet, I just think that it's a risk. But it's a risk that everyone takes when they use a place name. If you're willing to chance it, Tibet is a very interesting option.