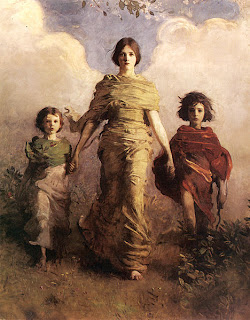 It's great when people suggest name for this blog that I had never heard of before. Thanks to E. for suggesting Livana.

I can see why E. is having trouble finding information on this name. Livana (not sure how this is pronounced, but "lih-VAH-nah" seems like a good bet) is a variant form of two separate names from two separate cultures. As it turns out, both meanings are equally Witchy. The first is Levana, a Latin name derived from the word levare, meaning "to rise" or "to lift." Levana is the goddess of newborn babies.

The Roman culture was a patriarchal one. Not as patriarchal as the Greeks, in which a woman from a rich family was not allowed to every leave her house. But still, men ruled their households in Rome. They had the power to claim their children as their own or to have them abandoned. This was literally expressed in a birth ritual in which the mother places the newborn on the ground and the father lifts the baby up, showing that he has accepted the child into the family. This is where Levana's name comes from. Neo-Pagans may invoke her for spells used to bring out paternal instincts in the fathers of their children.

As for the second origin, Livana could be a form of Lewana. Lewana is a Hebrew name meaning "shining white one" or "the moon." I, of course, do not have to tell you how important the moon is to Neo-Pagan religions. Because of it's connection to the Semitic root lbn, meaning "white," Lewana is a cousin to the name of a country: Lebanon.

Livana has never been a common name in the United States. It has an interesting dichotomy because Livana is connected to both Paganism and Judaism. In Neo-Pagan culture, there is actually a branch called Semitic Neo-Paganism or Jewish Neo-Paganism. This particular group focuses on the historical goddess cults of the Israelites. I can certainly see the name Livana appealing to members of this religion. Livana is perhaps more accessible than Levana or Lewana because it can be seen as a combination of Liv and Ana.

So to all you Pagan/Jewish families, Livana could be perfect.