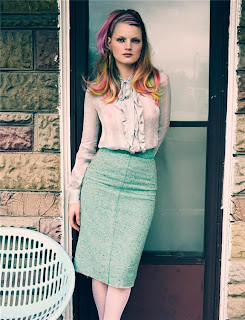 A few days ago I read a lovely story about how a couple arrived at the name for their daughter. The name? Nona. I looked at the name and thought, "?" And I'll tell you why I thought "?" I'm half Italian-American, and all my life the only way I heard Nona was as the Italian word for "grandma." And I commented saying so.

As soon as I hit "publish," I felt like I was a terrible person. Who was I to tell them anything bad about the name of their already-born daughter? Well, I guess someone else is going to say something about it eventually if they haven't heard it already...that's not a valid excuse is it? I should just learn when to shut my mouth. So to Nona's parents, I'm sorry. To show properly that I'm sorry, I'll spread the knowledge by giving Nona a profile.

Nona (pronounced "NOH-nah") was last in the United States popularity charts in the 1960's. It's peak was in the 1890s at #317. Sometimes it's used as the short form of Winona, a Sioux name meaning "eldest daughter." But by itself, it's a Latin name meaning "ninth," and also the name of a Roman goddess.

Along with her sisters, Decima and Morta, Nona was part of the Parcae. Otherwise known as The Fates. The Fates control the destiny of all living things. Even the Gods feared The Fates. Nona's job was to spin the thread of life from her distaff to her spindle. Because of her association with the number nine, Nona was the Roman goddess of pregnancy. How could I not know this? I played one of the Weird Sisters in Macbeth, they're based on The Fates!

Since it's an established name that's been around for a while, there's a lot of namesakes for Nona. One of these is Strega Nona, Italian for "Grandma Witch" (again with the grandma thing, sorry, but it's witchy). Strega Nona is a popular children's book by Tomie DePaola whose story is very similar to The Sorceror's Apprentice. Strega Nona takes on an apprentice. While she's away, the apprentice casts a spell that he can't stop, so the cauldron won't stop making spaghetti and meatballs. Pretty soon spaghetti and meatballs cover the whole town. I fail to see why this is a disaster. Anyways, Strega Nona saves his bacon.

I guess that I should point out that the Italian word for "grandma" is more often spelled nonna. And Nona does have a melodic sound to it, and I do like it. But my unfamiliarity caused me to stumble. Next time I stumble, I'll just smile and nodd. Then I'll look it up.