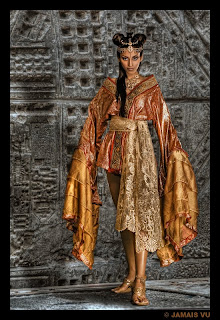 Yes, I know that this sounds like it could be Cheetara's sister, but trust me. It is a name.

Teigra (pronounced "TEE-grah") is a Greek name meaning, you guessed it, "tigeress." If you believe in the Chinese zodiac, we are in the last few days of the Year of the Tiger, until February 3th when it turns into the Year of the Rabbit (and I've got a nice rabbit name waiting in the queue for the end of the week). The Chinese belief is that people born in the year of the tiger are sensitive, deep thinkers, but are also hot headed. They don't have a great respect for authority, but are courageous and powerful. Of course, tigers were much more abundant in Ancient China then they are now.

The tiger's habitat used to be a lot larger, spreading throughout all of Asia. They would have existed as far west as Mesopotamia, so it makes sense that the Ancient Greeks would be familiar with the animal. It's no surprise that there's a lot of mythology and literature centered around this creature.

-In Ancient China, the tiger was the emblem of the highest ranking General. The Dragon and Phoenix would have been the emblems of the Emperor and Empress, respectively.
-The Hindu goddess Durga rides a tiger into battle.
-The weretiger is the shape shifting animal of Asia, replacing the werewolf.
-The tiger is the national animal of India, Nepal, Bangladesh, and North and South Korea.
-In the beloved comic strip Calvin and Hobbes, Hobbes is a stuffed tiger that comes to life.
-In the bestselling novel Life of Pi, a boy named Pi is stuck on a lifeboat with a Bengal tiger.
-According to a poll by Animal Planet, the tiger is the world's favorite animal.

Despite our love for the tiger, they are very endangered animals. Due to habitat destruction and hunting, three of the nine subspecies are already extinct. The hunting of tigers throughout the ages were done for three reasons, first because there is a genuine fear of tiger attacks. Tigers kill the most humans than any other wild cat, even though they are not part of their regular diet. Secondly, they used to be killed for sport. The third reason is to get a hold of their body parts for profit. There's the obvious allure of tiger fur, but also many Chinese people believe that tiger parts can be used for medicine and aphrodisiacs. Tiger parts trade is illegal, but there are farms breeding tigers specifically for this purpose.

I've seen this name pop up on lists of Wiccan names and some other baby name websites, so it's reasonably legitimate. But when I made the Thudercats joke, I did have a point. Teigra does have kind of a cartoon (for lack of a better word) feel to it. It looks made up, because I don't think this was used as a name in Greece. So it doesn't have a history. Also, I can't picture a shy girl named Teigra. You need to be an outgoing person to carry this name. But if you're daring and you're looking for a strong girl's name, Teigra's your gall.