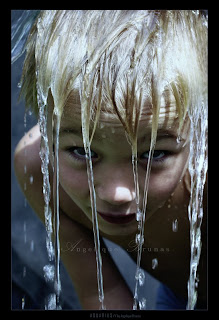 Some astrological names just don't work on a person. Capricorn? Possible, but not terribly appealing. Virgo? Sounds like the Pagan equivalent of Chastity, if you know what I mean. Libra? If she grows up to be a big girl, it'll sound like a mean joke. Cancer? No, just no.

But Aquarius? Cool and groovy, dude.

Today marks the first day of the month of Aquarius (pronounced "ah-KWARE-ee-us"). Basically astrology comes from the idea that what happens to the celestial bodies (the sun, moon, and stars) will mirror what happens on earth. So relative positions of these bodies from wherever you're located will influence your personality, love life, and other earthly matters. Even though all of the signs were used by the Ancient Greeks under different names, today we use the Latin version. Aquarius means "water bearer," and it originates from the constellation of the same name. It is associated with the air element and is therefore considered masculine.

Aquarius is sometimes thought to be the same character as Ganymede, a beautiful young man from Greek mythology. Zeus fell in love with him (Ancient Greece is so gay, so very, very gay). Zeus turned himself into an eagle and carried the boy off to Olympus, where he became the cup bearer of the gods. Aquarius is believed to have been responsible for flooding the earth in the Greek version of the Great Flood Myth (in the Bible this is the Noah's Ark story).

People who are born under the sun sign of Aquarius are believed to be visionaries who are progressive and independent. But they can also be insensitive and impatient with those that disagree with their ideas. To be honest, I'm not sure that I believe in astrology. I think that at best it's a fun diversion, and at worst it's a way to relinquish responsibility for your own life. But I might be saying that because the only Aquarian I know is very conservative.

This name will definitely sound very hippy-dippy because of the Broadway musical Hair. When they sing about the "Age of Aquarius" they're referring to a time of major change that comes approximately every 2,150 years. I wish I could give you more than that but trying to understand advanced astrology is like trying to make sense out of the stock market of you can barely count. There is zero uniform agreement on anything.

I found that although the name is classically masculine, the name is currently being used as a girls name as well. That's okay. It could sound cool on a girl, too. Not historically correct, but cool. If you or your child were born under a different sign and you're still in love with this name, just be aware everyone who hears this name will think that the bearer was born under Aquarius. However, I do think of the musical (and the song) first when I hear this name. This is not necessarily a bad thing, but if you're considering using Aquarius it might help to be a fan of all things sixties.