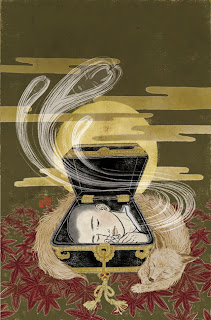 I knew when I started this blog that my obsession with all things Japanese was eventually going to show up here. We're going to start my insane love with Zen.

The Japanese word zen comes from the Chinese chan, which comes from the Sanskrit dhyana, which means "meditation." Zen is a type of Buddhism, an no one knows precisely when and where it first formed. It is traditionally credited to a figure of debatable historical existence, Bodhidharma. If he ever actually lived, he was an Indian prince-turned-monk that lived around 500 A.D. The earliest known record of zen comes from the 14th century.

Like most forms of Buddhism, Zen decrees that all sentient beings have the universal nature of transcendent wisdom. The aim of Zen is to access this nature within each person through meditation. Zen differs from other forms of Buddhism in that there is no written scripture. Everything is based on intuition, rather than rational thought or written dogma. They believe that doctrine obscures the way to truth. Yeah, I'm not sure I get it all either, but that's the gist of it. Zen started to become popular among non-Asian Westerners in the 1950's, which is the same time that Wiccan and Witchcraft practitioners were starting to come out of hiding.

I've seen this name pop up on some secondary characters in Japanese movies, but it looks like the most prominent fictional namesake is the cult comic book character Zen the Intergalactic Ninja. In the series, Zen is a skilled martial artist trained by the Masters of Om. He can also communicate through telepathy and can create food with the power of his mind whenever he's hungry. Those that are only vaguely familiar with comic books are not going to be familiar with him, though. It has a following but it's not as popular as, say, Spiderman.

So is there any such thing as Zen Wicca? Or Zen Paganism? Not officially. But that doesn't mean that they aren't combined. Zen isn't really a religion. There are no "gods" that you "worship." It's more of a way of life. So I think it is possible to be, say, Christian and practice Zen meditation. Meanwhile, all the different sects of Neo-Paganism are both religions and a way of life. It really depends on which tradition someone follows whether or not including ideas from other religions is acceptable or not. But I have found some people who refer to themselves as Zen Wiccans or Zen Witches, so it's not unheard of.

This name will sound very hippy-ish to a Westerner. I'm not sure how popular Zen is in it's native Japan. I suppose this name could be used as a girls name, but the overriding opinion is that this name is masculine. It's a very peaceful, calm boy's name. And I can think of a few parents who wish they had a peaceful, calm boy.