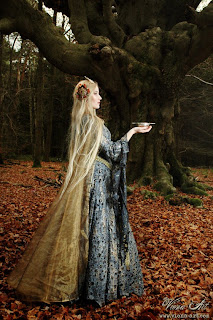 This is the time of year when there's lots of talk of stars, which made me think of this name.

This name has a lot in common with Coraline. Yvaine (pronounced "ee-VAYN") is a name that was introduced to the world through a Neil Gaiman book. Yvaine is the name of a fallen star who lands in Faerie, where stars are living beings. The hero, Tristran, vows to find the star and give it to a village girl named Victoria as proof of his love. She is also pursued by witches and princes who want her for their own nefarious purposes. When Tristram realizes his love for her, she abandons his courtship with Victoria and marries Yvaine. They cannot interbreed and therefore never have children.

Well, I read Stardust and...well, lets just say that it's not one of my favorite book. The ending of Stardust is anti-climatic to the extreme. The movie adaptation was better, but not overwhelmingly fantastic. And it doesn't look like it inspired many parents to use this name.

Some sources list Yvaine as a Scottish name literally meaning "evening star." I'm not sure where they're getting that from, and I don't think I buy it. I think it's more likely that it's a feminine form of Yvain. Yvain is the name of an important figure in Arthurian legend.

Sir Yvain (also known as Ywain, Owain, Ewain, or Uwain) was a Knight of the Round Table and the son of King Urien. He is one of the oldest characters in Arthurian legend and was one of the most popular in it's day. He appeared in Chretien de Troyes Yvain, The Knight of the Lion. In the story, Yvain seeks to avenge his cousin Calogrenant by killing the Knight Esclados. He succeeds, and also falls in love with Exclados' widow, Laudine. With the help of Laudine's servant, he wins her heart. But Gawain convinces Yvain to embark on an adventure. His new wife allows this on the condition that he return after a set period of time. Yvain has so much fun during his exploits that he looses track of time, and Laudine forbids him from coming home. Yvain is devastated, but is determined to win her back. In the end, Laudine eventually allows him to come back home. The character is based off of the historical Owain mab Urien, who was King of Rheged in Great Britain during the 500s. If this is where the name Yvaine comes from, that would make it a form of Owain, a Welsh name meaning "youth."

Yvaine has a Medieval feel to it that is likely to appeal to some people. You're going to have to explain the pronunciation and spelling more than once, as Yvaine is not as familiar a name as Coraline. However, it has a strange loveliness to it that sounds very magickal.