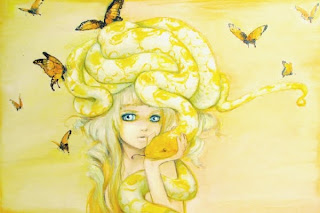 That's not surprising, since Saint Patrick became a saint for driving the "snakes" (read Druids) out of Ireland. Many Neo-Pagans refuse to recognize the holiday because of this. However, if you walk up to a random American and ask, "Do you plan to celebrate Saint Patrick's Day by going to church and thanking him for destroying a whole Pagan way of life?" the answer will probably be no. Unless you live in a very Irish neighborhood. No, most people use St. Patrick's day as a way to celebrate Irish heritage by engaging in random displays of public drunkenness. You're more likely to see decorations with leprechauns and rainbows than paper cut-outs of St. Patrick.

So what's a Witch to do on this day? Engage in some snake magick, of course. Snakes are sacred to Neo-Pagans, and particularly the Druids, due to their ability to shed their skin. The snake therefore symbolizes rebirth and renewal. Some Neo-Pagans have taken to pinning a snake accessory on their lapels, instead of wearing the traditional green "Kiss Me I'm Irish" badges. Snakey magick calls for snakey names for Neo-Pagan children born on this day as well.

Kundalini (pronounced "kun-dah-LEE-nee") is a Sanskrit name meaning "the coiled power." The name specifically refers to a type of yoga practice. Kundalani yoga is believed to release an energy that rests at the base of the spine, that is ordinarily curled up like a snake. The kundalini energy moves up the base of the spine. When it reaches the top of the head the practitioner experiences a mystical awakening.

As is common with incredibly unique names, I've only seen this listed as a girls name. For some reason it's more socially acceptable for girls to have unusual names than it is for boys. But there's nothing in the sound or the meaning that seems predominantly feminine, so I'm going to say that it's unisex.

I'm not going to lie, Kundalini would be a bold name for a baby. It's funny how a baby named Kabuki wouldn't feel out of step at all to me and yet Kundalini would. However, it would make a perfect magickal name for a Witch that loves yoga and/or our slithery friends.