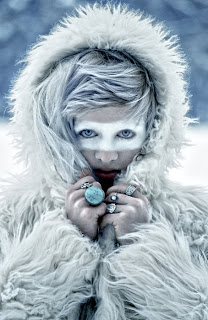 According to the Celtic Tree Months, the silver fir is the tree for the Winter Solstice. You may have been able to guess that.

The etymology of the word "fir" (which is a homonym with fur) is somewhat contested. In Old English there is the word furhwudu, meaning "pine wood." But it's more likely that it's derived from the Pre-Germanic furkon, which in turn is ultimately derived from the Proto Indo European perkos, originally a word for the oak tree. The Ancient Celts called the silver fir tree ailim (pronounced "AHL-em" I think.)

Just like yew is the "Tree of Death," the silver fir represents rebirth. They are often considered to be sisters, representing the circle of life. The silver fir is one of the tallest trees native to Europe, and it can grow over 160 feet tall. It is sacred to many goddesses including Diana, Artemis, and Druantia. Both Osiris and Attis were imprisoned in fir or pine trees, so the tree is sacred to them as well. The Druids believed that the silver fir was a symbol of hope. The tree is used in magick to invoke insight, power, protection, change, progression, and birth. Burning the needles or sweeping around a bed with it's branches is said to protect mothers and their newborns. It is also been used in shape shifting rituals, which is something I would like to see.

The silver fir has many practical uses. It makes very pretty wood used to make up the interior of buildings. It is also a popular wood for musical instruments. The oils are often used in perfumes and lotions to give a woodsy sent to these products. The sap of the silver fir can be made into turpentine like oil. In herbal medicine, it can stimulate mucous tissues if taken in small doses. In large doses it is a purgative.

The fir is also considered to be the quintessential Yule or Christmas tree. The first documented instance of the tradition was in the 1400s in Livonia. There is a popular notion that this tradition was taken from Saturnalia, and that's not quite true. Pagans did not chop down whole trees and take them into their houses. They would decorate with small pieces of evergreen shrubs. So it's similar in spirit but not quite the same thing, plus there's really no proof that one was taken directly from the other. And the growing of Christmas is quite profitable for local businesses. In America there are more fir trees than people.

Fir isn't a name that most people would think if. I think it would make a nice middle name, because in the first spot it just sounds too much like "fur" to me. But to each her own. It's a great name for someone with an affinity for the Yuletide season.