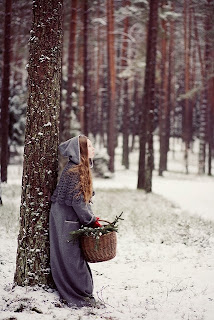 In the Celtic Tree Months, Yew is the tree for Winter Solstice Eve. This evergreen tree has a lot of history.

The word yew comes from the Pre-Germanic iwa or iwo. It is ultimately derived from the Proto Indo European ei meaning "reddish," "motley," or "yellow." The Celts called the tree idhu (pronounced "IH-huh," I think). Mostly what I'm talking about here is the European Yew, but there are a lot of different species of yew trees around the world.

The yew tree had extraordinary importance to the Ancient Celts. One of the oldest surviving wooden artifacts is a yew spear head estimated to be 450,000 years old. Many Celtic chiefs and warriors took their own lives either by their swords or by yew poison rather than submit to the Romans. The Yew is known as the "Tree of Death" throughout Europe. It is sacred to many dark goddesses including Hecate, Morrighan, Almathea, Cailleach Beara, Banbha, and Berchta. The tree is said to root in the mouths of the dead and release their souls. On the other hand, due to the tree's ability to live for a very long time, it is also the symbol of stability and immortality in Celtic culture. It is often used as the central "World Tree" in ritual spaces.

The yew also has a long history of being used to make longbows. The longbow is an early war weapon developed in Northern Europe. The 5,000 year old "Ice Man" found in the Alps had a bow and ax handle made from yew. Unfortunately, since most of the wood is too knotty they were chopping down trees only to discard most of it, which predictably lead to a shortage of quality mature yews. This lead to having to buy the wood from other countries, which lead to monopolies and deforestation starting in the 1200s. In the 1500s, the Bavarian government sent a plea to the Holy Roman Emperor to stop the cutting of yews, as it was doing great damage to the forests by breaking up the canopy and leaving other trees to wind damage. But it was a profitable business and the Holy Roman Emperor did nothing. By the 1700s there were no mature trees, but at that point longbows were being replaced by guns. The more things change the more things stay the same, huh?

It is inappropriate to do spell work on the day before Yule because it is a time of death. Instead, Neo-Pagans should conduct rituals relating to reincarnation. Yew wood is often used to make magickal tools like wands. It is also dried and burned as incense used to contact the dead or, legend has it, bring back the dead. You've probably noticed that I've mentioned that this tree is poisonous, so herbal remedies are few. Recently it has been used in the cancer drug Taxol (and due to this, the population of yews is threatened again, so conservation measures are needed). The needles and branch tips have also been used to treat lung and bladder problems.

Yew has never been a common name in the United States. But I think it's lovely. It's short and simple but magickal sounding. Yew would be a great name for any witchlet.

Image Credit:
Found via http://pinterest.com
Posted by Isadora Vega at 10:59 AM