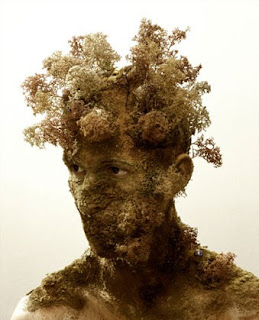 We are in the mists of the Celtic tree month of Elder, which would be something of a challenging name to live up to.

The Elder month takes place from November 25th to December 23rd, the day after the Winter Solstice. It's Celtic name is Ruis (pronounced "ROO-ish" I think). The elder tree represents the Crone aspect of the Triple Goddess, and it has wisdom associated with the winter of our years. It presides over death, rebirth, and creativity. This association goes back a long way, funerary flints from the megalithic era were elder leaf shaped. The Celts believed that the solar spirit was being held prisoner during this month. This tree is sometimes known as the "death tree" as well as the "witch tree," and the local hedgewitch would certainly have used this tree for magickal and medicinal purposes. This tree is particularly sacred to Venus, Bran, Hel, and the Great Goddess herself. In Christianity, the tree is seen in a negative light because it supposedly was the tree from which Judas hanged himself.

The elder tree has it's own spirit protecting it, a dryad called Hylde-moer, or the Elder Tree Mother. Should the tree be chopped down and turned into furniture, the spirit will follow it's property into the owner's house and haunt the inhabitants. It is considered especially unlucky to make a crib out of elder wood, for Hylde-moer will pinch the baby during the night causing it to wake up continuously. You can avoid this danger by asking the tree for permission before you cut anything from it. It is traditional to say, "Lady Elhorn, give me of thy wood, and I will give thee mine, when I become a tree."

The elder tree is highly associated with the holiday of Yule, so this month is a good time for magick involving the Sun god (or goddess, since there are a few traditions where the goddess precedes over the sun). The last of this tree's elderberries would have been picked during Samhain, and these were made into wine. Some Pagans considered this wine to be the last sacred gift of the Earth goddess for the year. This wine would have been drunk ritually to invoke prophetic visions. Elder twigs were woven into head dresses so that the wearer could see spirits. Justice was often dispensed under the elder tree, so coven swords often had elder handles. They are also a popular wood for wands, and there is a famous elder wand in the Harry Potter series. The elder tree are also used for protection against evil. You can hang branches on your door, cast berries and leaves in four directions, or carry a bag of twigs around your neck. The belief that elder protects against vampires is older than the similar myth about garlic.

The elder tree could be used in remedies for as many as 70 conditions. The bark can be used to treat headaches and induce labor. The leaves and flowers can be made into drinks and salves. Elderberry flower water is often used to treat sunburns.

If you're a Neo-Pagan family this name might be slightly problematic. In Wicca, Elder is a type of ranking in the Priesthood. It's the highest ranking for those that do not run a coven, meaning that Elders are solitary. Granted, Wiccans are not the only ones that use this term. There are Elders in Native American traditions, the Methodist church, and the Church of Later Day Saints. Wicca is also split up into Elder Wicca and Neo Wicca. Elder Wiccans concentrate on tradition while Neo Wiccans are much more eclectic.

But even without this, I would expect someone named Elder to be the eldest child in the family. After all, that's what the word means. If I met a boy named Elder and he was the middle child...I would find that a little strange. Obviously, the name Elder suggests someone who is very wise, so this is a good name for someone who wants their son to have this trait. But it would be an unusual one on the playground.