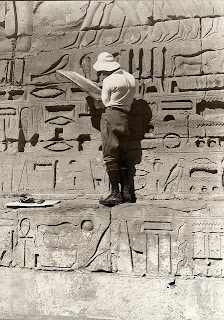 Horus is of one of the oldest and most important gods of Egypt, and his name has a long history.

In Ancient Egypt, Horus' (pronounced "HOH-rus") name would have been pronounced Haru, literally meaning "falcon." The name has some more poetic meanings like "the distant one" or "one who is above." Horus was also sometimes known as Nekheny, also meaning "falcon." Some believe that Nekheny is a different falcon god that was merged with Horus later on.

Horus is the son of Isis and Osiris. Isis retrieved all of the dismembered parts of her murdered husband except for his phallus, which was eaten by a catfish. She used her magick to resurrect Osiris and fashion a golden phallus for him in order to conceive their son. Once Isis became aware that she was pregnant, she fled to the marshlands to hide from her brother Set, who killed Osiris. There, she gave birth to Horus. Isis instructed her son to protect the people of Egypt from Set, god of the desert. Horus has had many battles with Set, both to avenge his father and to claim his rightful place as ruler. Set and Horus are the patrons of Upper and Lower Egypt, respectably. Neither god prevailed until all the other gods decided to side with Horus.

Horus is depicted as either a falcon (either a peregrine or a lanner) or a man with the head of a falcon. His right eye is the sun and his left eye is the moon, and they transverse the sky when he flies across it. He is also the god of war and hunting. The Eye of Horus is an ancient symbol of protection that remains popular with Neo-Pagans today.

The only person I can find who bore this name was an athlete in the 4th century. He was an Olympic boxer and a philosopher in Late Roman Egypt. Presumably he was Pagan, but Christianity would certainly be around at that point. And yes, he did win in the Olympics.

Horus has never been a popular name in the United States. It sounds almost exactly like Horace, a name associated with the older generation. I don't know if that makes it more accessible or less accessible. And, of course, there's the popular Neo-Pagan idea that you can't name someone after a deity. Clearly, not everyone believes that.

I think Horus is a great name, and Haru is quite nice as well. I think that it fits in with names like Atticus and Romulus. It's a strong name with a vibrant past. It would be great if someone gave this name to their son or to themselves.