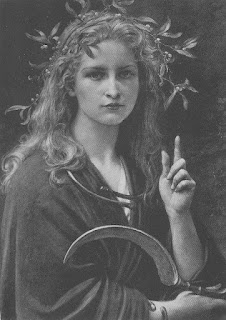 According to the Celtic Tree Months, the tree for the day after Yule is another popular holiday staple, the mistletoe.

The etymology of mistletoe is a subject of dispute. It might be related to the Old German elements mist, meaning "dung," and tang, meaning "branch." This might have been used because mistletoe seeds can spread through bird feces. To the Celts and Druids, it didn't really have a name. It was considered too sacred for the written word.

The mistletoe isn't exactly a tree. It's an evergreen parasitic plant that grows on trees. They use their host trees for water and nutrients. They grow in a mass of stems that gave it it's nicknames: "witch's broom" in Europe and "basket on high" to the Navajo. Many people today see the plant as a pest, but it is important to the ecology of forests. Many animals depend on the mistletoe for food.

The mistletoe is very important to a number of mythologies. Roman poet Ovid once said, "Ad viscum Druidae cantare solebant" ("The Druids are wont to sing to the mistletoe"). The Druids would gather the mistletoe on Midsummer, cutting a piece with a golden knife making certain that it didn't touch the ground. Two oxen would be sacrificed during the ceremony. A mistletoe growing on an oak tree is extra powerful. In Greek mythology, it is believed that The Golden Bough of Aeneas is a mistletoe. A sword named Mistilteinn (Old Norse for "mistletoe") features prominently in several Norse myths. The plant is also associated with Loki, Osiris, Hercules, and Shu.

The Celtics, Romans, and Germans all believed that the mistletoe was the key to the supernatural. It works best for spells involving healing, protection, and dreams. Many Pagans believe this plant symbolizes divine male essence because the berries resemble semen. So the plant stands for sex and fertility. This is why there is a tradition of kissing under in during the Yuletide season. The plant is also used for protection, making sure that the children of the house will not be kidnapped by the Fae. Mistletoe is also a great material for magickal tools like wands, rings, talismans, and incense.

In herbal medicine, mistletoe is used to raise blood pressure and sooth muscles. The plant can also induce menstruation and treat postpartum hemorrhaging. It is known as an effective treatment for tumors in some animals. Considering it's "fertility plant" status, it's slightly ironic that the berries are known to cause miscarriages when eaten. It is often used to cause contractions in the uterus or intestines.

As a name, Mistletoe is daring but also overly cute. And personally, I would pause before giving anyone a name that means "dung twig." But most people don't know that. For Neo-Pagans, it's energy is very masculine, but people are probably more likely to give this name to a girl. I think it would work for either gender, provided that the person who's getting it is the type of personality that works well with it. Plus, it's perfect for the season.

The nominations for Pagan Name of the Year are officially closed. Look for the winners next week!