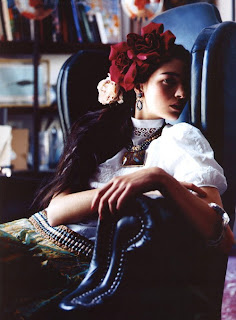 I've actually met a man named Madrigal, so I did not just make this one up. My family was on a cruise ship and he was our waiter. He was from Spain, and after researching this name that makes sense.

Madrigal (pronounced "MAH-drih-gal") is derived from the Latin word matricalis, literally meaning "from the womb." But it was used as a word meaning "invented," "original," or "ingenious." The word is most attached to a type of secular music for unaccompanied voices.

Madrigals were invented in Italy, more specifically Florence, during the 1520s. It came from a resurgence of interest in Italian vernacular poetry. There were madrigal dinner theaters and madrigal comedies. It's rise to popularity is partially due to the fact that printed secular music became widely available after to the invention of the printing press and movable type. It was the most popular form of music in it's day, but then operas came along and stole their thunder. A madrigal is also a type of poetry, which is why this word is listed in the dictionary as "a short love poem."

However, there are a few namesakes that have Madrigal as a surname. Guess what they all have in common? They're all from Spanish speaking countries. Madrigal is the name of two towns in Spain, so that's probably where it comes from.

But I've only heard of it as a first name once. When I see it listed it's listed as a girls name, but I see no reason why it couldn't be used for both genders. And since it is almost Yuletide and the carolers are about to come out very soon, I figured this musical name would be appropriate for this time of year.

Madrigal will be a new one for a lot of people, but it has an intriguing Medieval sound that will appeal to people. Particularly the Neo-Pagans that are really into Renaissance Fairs. Madrigal is a unique name for the daring namer, but it still has a history.

Image Credit:
Found via http://pinterest.com
Posted by Isadora Vega at 10:48 AM