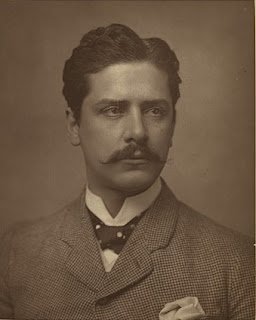 Like Ichabod, this is a very Jewish name. Ebenezer (pronounced "eh-beh-NEE-zer") is a Hebrew phrase Eben ha-Ezer and it means "stone of help." In the Bible (presumably the Old Testament), this is a name of the memorial stone set up by the prophet Samuel to make an important victorious battle in Jewish history. The battle took place in a town called Eben-Ezer, and the battle was between the Israelites and the Philistines (invaders that immigrated to their territory).

Apparently, Ebenezer only came into "naminess" because the Puritans. But Ebenezer Scrooge remains it's most famous namesake. He first appeared as the principle character in Charles Dickens' novel A Christmas Carol in 1843. It has remained a classic ever since. I can't imagine any person who doesn't have a passing familiarity with this story, but here's a recap anyways.

Ebenezer Scrooge is a miserly old curmudgeon who hates Christmas. All he cares about is money, and he is not well liked in his town. He says, "Bah, humbug!" a lot. But on the night of Christmas Eve, he is visited by three spirits (well, four if you count his old pal Jacob Marley). They are the Ghost of Christmas Past, the Ghost of Christmas Present, and the Ghost of Christmas Yet to Come. They essentially scare him into being a good person. On Christmas morning he awakes a changed man, and from then on he strives to be a generous and loving during the time he has left on earth.

Charles Dickens got the inspiration for the character's name from a tombstone. The grave marker was for Ebenezer Lennox Scroggie, and it listed his profession as a meal man (he sold corn). But due to Dickens' mild dyslexia, he read it as "mean man," and the rest is history. If you want to go hunting for this tombstone, you're out of luck. It was removed during renovations and misplaced.

"Scrooge" has become slang for a miserly person, but what about Ebenezer? I have to admit that it would be tough to separate the name from the character, just like it would be for Ichabod. And if that worries you there are a few variations: Ebeneezer, Ebenezar, Ebnezer, Eveneser, Evenezer, Eben, Ebbie, Eb, and Ebbaneza for girls (which I immediately find my heart fluttering over for a girl). But Ebenezer in an of itself is a lovely name.

What I don't understand about avoiding Ebenezer is that the character redeems himself at the end. Shouldn't it be a positive association? Isn't it good to use his name? I think it is.