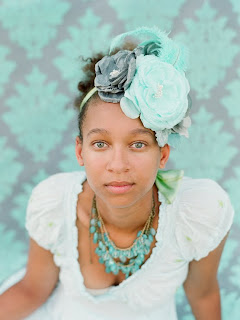 This post is in dedication to, who else, Magaly of Pagan Culture. And the first time I posted a comment on her website, I mentioned that I had to look up Magaly because I hadn't heard of it before then. To be honest, I was kind of joking. But she's been asking for a profile ever since, so here it is.

So. Magaly. Which is pronounced "ma-GAH-lee." You mentioned to me that you thought your name was short for Margarita which is Spanish for "daisy." I was worried that your parents were going to hate me, but technically you're right. While looking up the word for "daisy" in the English to Spanish dictionary I found something interesting. The word for a cultivated daisy is deizi, while a wild daisy is margarita. Why the difference? I can't say.

But according to most baby name websites, you'll have to exchange flowers for gemstones. Almost everyone agrees that Magaly, or Magali, is a variant of the French name Margaret, meaning "pearl." In the Spanish language it's a form of Margarita, which is the Spanish form of Margaret.

This name could also be derived from the Persian name Mar Galiti, meaning either "daughter of the sea," or "child of light." Mar Galiti seems like an antiquated name, because I can't find anything more about it, or any namesakes. If anyone knows any more about Magaly's Persian roots I would love to hear it.

In any case, Magaly became popular among Spanish speaking Americans and Mexicans because of a telenova (a Spanish language soap opera). In the 1980s, a character named Magaly appeared in La Fea Mas Bella ("The Most Beautiful Ugly Girl"). Although it doesn't seem like she had that big of a part, some parents began used Magaly as their daughter's full names, or as a nickname for Margarita. It wasn't popular enough to chart in the United States, however it's now ranked at #3o4 in, oddly, Quebec.

What can I tell you, Magaly? Your name's a shifty one. For everyone else, Magaly is a cool name. Although if you're naming with intention, be warned that it's etymology is not so straight forward.