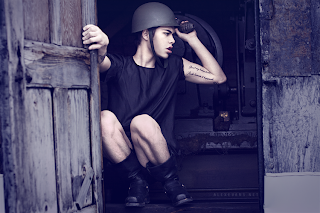 It's the name of a god, a planet, a month, a teen sensation, and a candy bar! Is it a good option for a person?

Mars (pronounced "MAHRZ") was the Roman god of war. His name is possibly derived from the Latin word for "male": mas. His symbol, a circle with an arrow pointing towards the upper-right side, is also the symbol for men. The month of March, which was originally called Martius, is named after him because this was the month when a festival was celebrated in honor of him. In contrast to his Greek counterpart Ares, who is viewed as being a destructive force, Mars was seen as a protector. He represents the power of war as a way to secure peace. Mars is the father of Romulus and Remus, the founders of Rome. He is also the father of Cupid and Aeneas, both products of his love affair with the goddess Venus.

His birth story is an interesting one. Juno is the Roman goddess of motherhood, but Jupiter stepped on her toes when he gave birth to Minerva without a woman's help (Minerva broke through his forehead). Juno was very disturbed by this, and consulted with the goddess Flora on how to restore the balance. Flore found a magic flower, touched Juno's belly, and she became pregnant. And that's how she gave birth to Mars without a man's help.

Aside from being the god of war, Mars is also the god of agriculture. His warlike nature and his virility are seen as two facets that achieve the same end. War and crops were both seen as a way towards security. He was often called to ward off hostile forces, weather that means drought or a neighbor coming to do battle. He was also called to ward off "rust." This, too, had a double meaning. It could mean the rust on weapons, but it could also refer to the wheat fungus that killed crops.

There are two animals that are important to Mars, the wolf and the woodpecker. The wolf is due to his association with Romulus and Remus, who were raised by a she-wolf. But the woodpecker might be a little surprising to some people. The woodpecker was sacred to the ancient Romans due to it's strong beak. The beak was believed to contain Mars' power to ward off danger, so it was often worn around the neck as an amulet.

Given all that history, it would seem that Mars would be a great namesake for a little boy. But Mars isn't a very common name at all. There might be more kids on the playgrounds named Mars if it wasn't also the name of a planet. Mars is the fourth planet in our solar system, and is the planet most likely to harbor life besides ours due to the presence of water. The planet has taken hold in the public imagination, many aliens in movies are Martians. The general consensus is that all of this makes this name a little too spacey. Some people believe that naming a child after a planet is just weird.

But aside from the name's mythological and celestial connotations, Mars has been used to make more recent namesakes. If you know some teenagers, you might have heard of the television series Veronica Mars. The show might be the reason that I'm seeing some comments from people who think that this is a girls name. Or if you live in the United Kingdom, you might have eaten a Mars bar. There are also many other characters and products named after the god, many of them I've never heard of before.

I would have to respectfully disagree with whoever thinks that this name could be used on a girl. To me it's all masculine. And I don't think Mars is completely unusable because of the planet. It is, however, a bit too militant for my tastes. And the idea of the god, that peace can only be achieved through war, is not one that I share. I far prefer March. I would definitely use the name of his month for my son. Still, Mars an interesting choice.