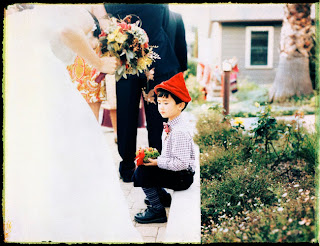 I have to admit something about cataloging names of interest to Neo-Pagans. I'm kind of doing this job in the dark. It would be extremely helpful if I actually knew the names of real Neo-Pagan children, but most of the time parents don't share them. I understand the desire for secrecy, we still face stigma in parts of America. It just means that I have to sit here and keep guessing. So you can imagine when I stumbled upon a blog detailing a Wiccan mother's life and challenges with her medically fragile son named Acorn, I clapped my little hands with glee. Not because little Acorn is medically fragile, but because his name is so new and awesome.

Acorn (pronounced "AY-korn") is a nut that comes from oak trees. It's also sometimes called oak corn, which is probably where the word comes from. The acorn has a lot of surprising history as an important symbol and food source for ancient cultures.

The Norse used acorns as good luck charms against the wrath of Thor, the god of lightening. People would leave acorns on their windowsill in order to protect the building from being struck by lightning. This tradition lives on in the acorn-shaped decorations on the ends of window-blind cords. It is also used as a motif in Roman, Celtic, and Scandinavian art and architecture.

Acorns used to be a more popular dietary staple than they are today. They were useful food items because they don't need to be eaten or processed right away. People would keep them stored for times when food was scarce. If you were in a poor family in ancient Greece, you would eat them out of necessity. In ancient Japan, the nuts were processed to make acorn cakes. Nowadays, it's only viewed as a tasty treat for squirrels. The only cultures that still eat acorns today are the Native Americans and the Koreans. In Korea you can eat acorn jelly (called dotorimuk) and acorn noodles (dotori guksu.)

To be fair, Acorn might not be the boy's real name. The mother has a baby in-utero that she refers to as Leaf. That might not be out of the question. Acorn and Leaf is a logical sibling set. But the father is listed as Big Oak. Hm. These names might be made up to protect the family's identity. But let's not kill my hopes and dreams and assume that it's a real name.

There's something wonderfully elfin about Acorn. I can definitely picture it on a little kid. The only problem is I don't know if I can picture it on an adult. But this might be just because I've never heard it on an adult, ever. It would be very interesting to see how a child named Acorn would turn out. I see someone woodsy and sweet. Hm...what do you think? Could the name Acorn stand out in a good way?

Image Credit:
Photo by The Brothers Wright found via http://greenweddingshoes.com/real-wedding-maisie-brians-whimsical-woodland-wedding/
Posted by Isadora Vega at 1:07 PM