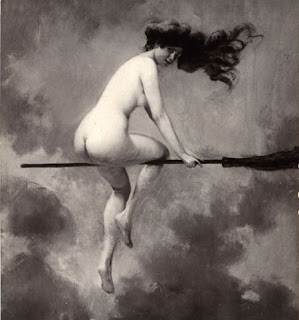 Happy Witch's New Year, everybody! To our friends in the Southern Hemisphere, Blessed Beltane!

To be honest, I don't care about Halloween. It's a silly secular holiday that's over commercialized and doesn't have much substance. It's not bad, but when I have my own kids I wouldn't want them to forget what this time of year is really about. Samhain is arguably the most important holiday in the Wiccan wheel of the year.

First off, Samhain has a tricky pronunciation that I'm sure I've butchered many times, and it's the subject of much debate and ranting. I'm telling you, every single explanation I've seen says it differently. Some pronounce it the way that it's spelled, "SAM-hayn." Others pronounced it like "SAH-win," "SOW-wen," or "sow-WEEN." I've been saying it "sah-VEEN." Once source who is well versed in Gaelic believes that it should be pronounced "SHAHV-nah" if you're a boy, and "HAHV-nah" if you're a girl. Now I know why lots of Neo-Pagans say Halloween or Hallows. Maybe it's just easier. As for the meaning, it is believed that Samhain (also spelled Samhuinn or Sauin) is derived from the Old Irish samfuin, meaning "summer's end." Others disagree, saying that it evolved from the Celtic word for "assembly."

In Ancient and Medieval Ireland, this holiday marked the beginning of winter. During this time, trade, harvesting, and warfare would officially end, and kings would gather their people in tribal assemblies. This holiday is a popular setting in many Irish myths. In a series of stories called "Tochmarc Emire," many of the quests taken by the characters start on the night of the Samhain Feast. In a story called "Cath Maige Tuireadh," the goddess Morrigan and the god Dagda meet and have sex before battle, so that Morrigan may act as a sovereign figure for Dagda's people (in the olden days, having sex was equivalent to getting married).

The idea of Samhain being a festival of the dead was not originally there. But once it catched on, it has persisted in some form or other ever since. Velu Laiks is celebrated by Baltic Pagans, Winter Nights by Asatru, Shadowfest for Stregas. Dia de los Muertos is beloved by practitioners of Santeria, as well as indigenous religions in Mexico and South America. Hindus celebrate Diwali. Vodou practitioners celebrate Fete Gede. If you're Catholic, you celebrate All Souls Day. Honoring the dead during this time is not so much a Pagan thing as it is a human thing.

Here's how Wiccans can celebrate Samhain. Most Neo-Pagans believe that the soul exists after we die, and that we go into some sort of afterlife. Many Wiccans use the term Summerland, a place were it is never winter. We do not fear the ghosts that come into our houses on this day, because they are our loved ones, or "beloved dead." We set up alters for them in our houses, giving them food as an offering. We like to carve and light jack-o-lanterns so that our beloved dead would know where to find us. Of course, pumpkins are indigenous to North America and therefore a relatively new tradition. In the olden days, they hallowed out turnips. Because this is the time for death, it is also the time for rebirth. And, like on Beltane, this is the traditional time to perform the Great Rite.

During this time, The Goddess is in her Crone stage which is the height of her wisdom. This is the day when the Horned God passes into the underworld. But not to worry, the Goddess is pregnant with the next Horned God, and she will give birth to him at Yule. So yes, the Horned God is his own father.

If you're going to use Samhain as a moniker, it's pronunciation is going to be the biggest hurtle without a doubt. Should you accept the challenge, Samhain is a great holiday name that honors our cultural Witchy heritage.