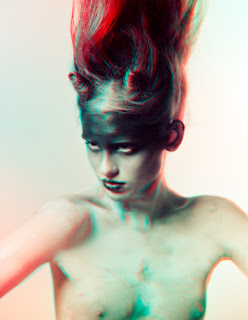 As this is the first day of the Witch's New Year, this is the perfect time to profile the patron goddess of Witches.

No one knows for certain what Hecate (pronounced "HEH-kah-tay") means, but there are several theories. Some think that it's the feminine variation of an obscure name for Apollo that translates as "the far reaching one." Other's think it comes from the Greek word for "will." Some have noticed the similarity to the name of another deity, an Ancient Egyptian goddess of childbirth named Heqet.

Hecate is technically a Greco-Roman goddess, but it's a little more complicated than that. Earliest worship of her could be traced to a small culture named the Carians, who lived in what is now Turkey. She must have been very important because variations of her name were given to a good many children. Her cult grew and grew and eventually found it's way into Greece.

Most likely this caused some conflict. Hecate is the goddess of Witchcraft, magic, childbirth and children, the moon, the crossroads, necromancy, and dogs. This means that she was stomping all over the territory of Artemis. Therefore, Hecate never fully integrated into the Olympic "family." Some myths list her as a titan who was allowed to live because she fought on Zeus' side. Other stories claim she is Artemis' aunt. Otherwise, she defies description.

Hecate plays a big role in the story of Persephone. She comforted Demeter when she was in great distress over the disappearance of her daughter. She later became a mother figure to Persephone while she was in the Underworld. This is why some stories describe her as "tender hearted."

But Hecate is not one to trifle with. Images of Hecate were often placed at the gates of cities and households so that she may keep out evil spirits. But if offended, she could always let evil spirits in. She is often portrayed in art as three women, their backs to each other in a triangle looking out in all directions. The word "jinx" might have come from a sacred object associated with Hecate. The Greeks observed two festivals for this goddess, one on August 13th and one on November 30th. The Romans one-upped them by giving her a festival for the 29th of every month.

In Neo-Paganism, Hecate has evolved into a crone figure. This comes into direct conflict with the classical Greek image of her as a virgin. Hecate's transformation into a folkloric figure for women's gatherings, the moon, and Witchcraft began in late antiquity to early medieval times. This belief was concentrated in Northern Italy, Southern Germany, and and the western Balkans.

I remember that there was a Wiccan name enthusiast (not me) who added Hecate to the database over at Baby Name Wizard. It was almost immediately taken down. That speaks volumes as to how this name is perceived by the general public. Of course the Church completely demonized her. She stands as a liberator of women. There are all sorts of crazy inaccuracies around, like that she is "the destroyer" and that she wears a necklace made from men's testicles. I mean, she can be scary, but she's not that scary.

People who don't know better might liken giving this name to a daughter to giving the name Lucifer to a son. But if you're a Neo-Pagan who knows the truth, Hecate is a wonderful namesake even if it does have a bit of a harsh sound. I've sometimes seen it spelled Hekate, but from what I've seen Hecate is the most accepted version. If you're daring, consider this name.