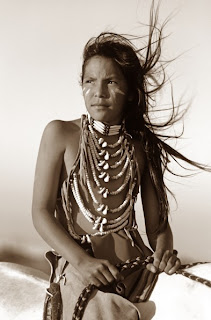 This may be the ultimate Thanksgiving name, aside from maybe Mayflower.

Samoset (I'm not sure one the pronunciation) is a either an Algonquian or Wampanoag name, the most famous Samoset belonged to both tribes and most sources don't list a language besides "Native American." But they all agree that it means, "he who walks over much." It can be interpreted as someone who travels. The Thanksgiving Samoset did a lot of that.

Samoset was born into the Abenaki tribe, which resided in what is now Maine. This was also a region in which the English and French fought for fishing and fur rights. Samoset had frequent contact with these men, and was able to pick up a working understanding of the English language.

Though he was a chief himself, he also acted as the number one man to Massasoit, chief of the Wampanoag, who lived in Massachusetts. This is the area where the Pilgrims landed. Earlier attempts at conversing with Native Americans were a failure, they had simply scampered away whenever the Pilgrims came near. Which was probably just as well, as the Pilgrims were so weak at that point that they were incredibly vulnerable to attack.

So imagine the Pilgrims shock when virtually naked Native American man strode through the middle of Plymouth Colony and greeted them in English. Samoset was in the area, so he introduced himself. He was the first Native American to do so. He explained who all the surrounding tribes were and introduced them to Massasoit and Squanto. Thanks to him, they were able to trade for goods with the Native Americans and survive. Later, Samoset was also the first to sign a land sale contract with the colonists. Poor sucker.

This is the perfect name for someone born during the Thanksgiving season. Samoset may not be a common name, but Sam is a common enough nickname. It's particularly a good name for someone who wants to honor the Native American side of the story.