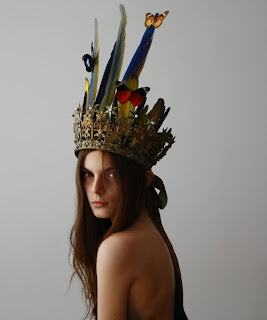 I went to a fundraising Neo-Pagan party a few days ago, which was kind of lame. If they're going to do it again they need to pony up on better food. But they did have vendors, and I bought a Bastet plushie and a new, pretty, hand carved wand. It was a beautiful bright reddish wood that reminded me of a cello. I looked to see what type of wood it was made from, and it said "Redheart."

Redheart. Huh. I had never heard of that tree before. But it called to me and I bought it. As the sales woman wrapped it up I though, "I hope that it's not from the rain forest, because then I'll have to offset that somehow."

A few days later, I received the certificate of authenticity. It says, "Redheart wood originates in the southern part of Mexico, Yucatan Peninsula, Belize and Guatemala. Variations of the species can also be found in Central & South America as well as Australia." And that pretty much means the rain forest. Well, I guess I'll be clicking here for a few days.

It's not one of the more popular Witchy woods, so there's not a lot of information out there about it, but here's what I know. Redheart was a popular tree for the Ancient Mayans because of it's durability. In some parts of the world, this was and is a wood used for jewelry. It has many names but Redheart is the most used because of, well, it's color.

This wood makes a good wand for someone who wants to overcome their fears and focus at the task at hand. Redheart brings confidence and self-esteem. It helps the owner find personal truth and inner judgement, aiding in completing goals.

Redheart sounds like a hippyish sort of name, but doesn't fall within the realm of cliche. Heart has been used as a name before, so why not Redheart? So if you're looking for a daring botanical name, Redheart has strength and beauty.