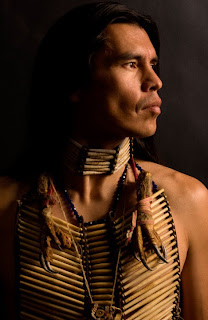 Oh my various Gods! Thanksgiving is only in a few days! Where did the time go? Since the American names theme worked so well back during Independence Day, I'll do it again for Thanksgiving, focusing on Native American and Puritan names.

Hiawatha (pronounced "hiy-ah-WAHTH-ah") is best known for being a character in Henry Wadsworth Longfellow's poem "The Song of Hiawatha." The poem presents a distorted European view of Native American culture and myths. In it, Hiawatha falls in love with Minnehaha, invents the written language, and discovers corn amongst other things. At the end, "the Priest of Prayer, the Pale-Face" arrives, and Hiawatha joyfully accepts his message of Christianity. Uh-huh. Right. Sure he does, Longfellow.

Longfellow's poem is a work of fiction that doesn't have anything to do with the real Hiawatha. The real Hiawatha lived during the 1500s, and he was known as a great leader. Depending on which narrative you follow he was either a leader of the Mohawk or the Onondaga. Hiawatha was a follower of a spiritual leader and prophet known as The Great Peacemaker. This man believed that all the Iroquois tribes  concentrated in what is now New York should be united into one nation. Hiawatha is legendary for being very charismatic and a great public speaker, and he used those skills to make The Great Peacemaker's vision a reality. He was instrumental in forming the Iroquois Confederacy, which fought against British colonization. The Iroquois Confederacy has since been disbanded, but the Iroquois League still exists.

Hiawatha is derived from the Iroquoian name Haio-went-ha, meaning "he who combs." I assume that it was given to him because it fit his personality. I have no idea if this name is meant to suggest someone very vain (he combs his hair a lot making sure he's presentable) or if it denotes someone very thorough (he combed the land until he found food to bring back to his family). Either explanation is quite interesting.

The common American instinct with names that end with -a is to give it to girls. Indeed it does have a history of use as a girls name in the Cajun South. However, I don't think anyone would dispute the fact that it's masculine because it's recognized by most everyone.