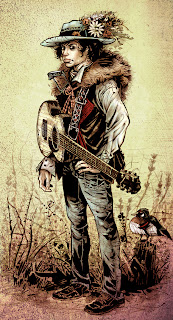 We are in the Celtic Tree Month of Reed, which is a great masculine nature name.

You might have read that first sentence and thought, "Uh...reeds aren't trees." When you see the word Reed in most Celtic lore, they are actually referring to what is now know as the dwarf elm tree, not the type of grass that usually grows by water. This month is sometimes called the Elm month by modern Neo-Pagans. So I'm going to be switching between the two words a lot. It's Celtic name was Negetal, pronounced like "nyettle." The month of Reed starts on October 28th and ends on November 24th.

This tree is strongly associated with Samhain. It's appropriate then that Reed symbolizes the mysteries of death. If you would like to have a seance, this is a good time to do it. But it could also be associated with royalty and the hearth. It is also very popular with elves, and sitting under an elm tree while singing will give you a good chance of attracting one. This month is considered to be a great time for magick relating to music, probably because reeds were often used to make flutes (or is that the grass? I'm sure you can make a flute from both). A bag filled with elm twigs were hung around the necks of babies so that they could be eloquent speakers later in life. Regeneration, fidelity, boldness, and protection are all qualities this tree possesses.

Reed has many practical applications as well. In particular, Slippery Elm bark has many medicinal uses. In the olden days, this bark was powdered and turned into "milk" for babies that were lactose intolerant (I wouldn't suggest this for people inexperienced with herbs). You could turn it into a tea to help with insomnia or an upset stomach. It was also turned into a poultice that could treat poison ivy, burns, wounds, infections, and ulcers.

When I first saw this name, my initial thought was the Nile River because there's lots of that type of grass there. I think. Someone else might think of swamps, though. My second thought was music. In my band nerd days, I played the clarinet and the oboe, respectably single reed and a double reed instruments. For those that didn't play woodwinds, reeds are pieces of woods that cause the vibrations necessary to produce the sound. There are even triple reeded instruments out there, which blows my mind.

But Reed has long been an Old English surname meaning "red." The name most likely started out as a nickname for someone with red hair. There are many variations including Read, Reade, Reid, and Reyd. Usually, it's listed as a boys name, and it has the history to back it up. The boy's name Reed has never left the top 1,000 names in America, but it was at it's peak at 2010 at #380. Recently, parents have also been giving this name to their daughters, but it hasn't reached the same heights. Yet.