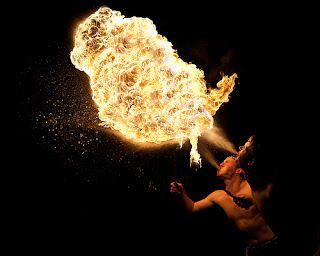 Those that are fans of the movie V for Vendetta have a passing familiarity with Guy Fawkes, but most don't know precisely why he did what he did or why he's an important historical figure. Since Guy Fawkes Day, also known as Guy Fawkes Night, Bonfire Night, or Fireworks Night is today, It's the perfect time to profile this name.

This day commemorates what took place in England on November 5th, 1605. Guy Fawkes was a member of a Catholic group who wanted to assassinate the Protestant King James I so that a Catholic leader could be placed on the throne. Guy Fawkes was found guarding explosives beneath the House of Lords and was arrested. The day he was sentenced to hang, he jumped from a scaffold and broke his neck.

The day was celebrated as an annual holiday almost immediately, celebrated with fireworks and burning effigies of Fawkes and the Pope. The day was mostly used by Puritans to spread anti-Catholic rhetoric. The holiday was even brought over to the Puritans in America and Canada, where it was sometimes celebrated as Pope Day. However, Pope Day was forgotten after the Revolutionary War. In the mid 1800s, the Roman Catholic Relief Act gave Catholics civil rights in the country. Queen Victoria herself felt the tradition was outdated. It didn't leave without a fight, but Protestant religious fervor lessened considerably, changing the face of the holiday.

Today, Guy Fawkes Day has mostly died out. Where it is celebrated, it's mostly as a children's holiday. Kids make simple or ornate effigies of Fawkes, and either hang out on street corners or go door to door to collecting money. Then the effigy is placed on the bonfire, and children compete to see who can build the biggest fire. Regardless of whether or not the holiday still exists, Guy Fawkes is something of a cult figure. He appeared in children's books and penny dreadfuls as a sympathetic character and a hero. The graphic novel and film V for Vendetta is based on his legacy.

The surname Fawkes was brought to England during the Norman Conquest. The name derives from the town that they lived in in Normandy, called Vaux. The family was given land in Essex for their assistance in the Battle of Hastings. Other spellings include Faux and Fauks.

You might be thinking, "That's interesting and stuff, but what does that have to do with Neo-Pagans?" Well, nothing. Some scholars say that Guy Fawkes Days served as a Protestant replacement for Samhain and All Soul's Day. I tend to doubt that. It might have been very convenient timing to have this event happen during these holidays from competing religions. But I don't think they planned it that way. It's just a coincidence, in my opinion.

But a character that was named after Guy Fawkes does have Witchy cred. Fawkes the phoenix is Dumbledore's animal companion in the Harry Potter series. In Harry Potter and the Chamber of Secrets, Fawkes saved Harry's life while fighting the Basilisk. He also plays a big role in Harry Potter and the Order of the Phoenix, in which he served as a means of communication between order members. His feather is in the core of Harry and Voldemort's wands. When Dumbledore died, he wailed in grief on the grounds of Hogwarts, and then was never seen again (that wasn't a spoiler, right? I think most people know what happened in the stories by now). Him having the name Fawkes is a joke on J.K. Rowling's part, because the phoenix periodically explodes.

In America, most people would think nothing of a little boy named Fawkes. They might remember the Harry Potter connection, but most have no idea who Guy Fawkes is. I have no idea how this name would play out in England, but here it just sounds like another cool name like Finn. So it looks like gunpowder and treason was forgot after all.