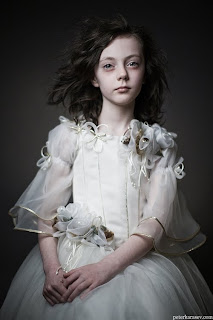 The Oscars are coming up, and one name from this years films that stood out for me was Ariadne. Ariadne was Ellen Page's character in the fantastic-but-overrated Inception. I swear that I had never heard of this name before the movie. Now it seems like I'm seeing it everywhere.

Ariadne (pronounced "air-ee-AHD-nay") is a Greek name meaning "very holy one." This is the name of an important character from Greek mythology. Ariadne played a pivotal role in the story of Theseus and the Minotaur.

Ariadne was the daughter of King Minos of the island of Crete. The Minotaur was actually her half-brother. The god Poseidon caused her mother to become sexually attracted to a bull when King Minos refused to sacrifice this same animal to him. This union between the bull and the Queen created the Minotaur. King Minos threw the creature into a labyrinth and fed it human flesh. Years later, King Minos required the Athenians to send seven virgin girls and seven virgin men to Crete in order to be sacrificed to the Minotaur. Theseus was an Athenian Prince who was fed up with the tyranny. He vowed to kill the beast. Ariadne helped him by supplying a ball of twine, which he used to find his way back out of the maze after he completed his quest. Although she fell in love with Theseus, Ariadne eventually became the wife of the god Dionysus. Some historians believe that Ariadne is the Greek goddess of Crete.

Inception was referencing this myth when it created their own Ariadne. She's a clever and creative character who designs the labyrinthine dream world that they inhabit. But there are other Ariadne's in history and literature. An opera about the mythical Ariadne was created by Richard Strauss and Hugo von Hofmannsthal. Aelia Ariadne was the Empress of the Byzantine Empire, who's reign alongside her husband wasn't particularly popular. Agatha Cristie created her famous novelist/amateur detective, who is based on herself, and named her Ariadne Oliver.

If you pay any attention to the links in the sidebar you might have noticed someone with this name writes one of the Pagan blogs. She's not the only one who chose this name, it appears to be a favorite among Neo-Pagans but I wouldn't say it's as common as Raven and Wolf. On the other hand, Ariande has never reached the United States popularity charts, so it's uncommon in that regard.

At first it was a real challenge to get the pronunciation right, so be prepared for that if you use it. But after I got it down, I fell in love with the name. It's a beautiful, magical sounding name and I wish there were more little Ariadne's running around in playgrounds. Maybe the movie will give it a boost.