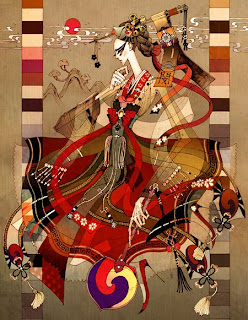 It seems unlikely that Buddhism, a religion that promotes enlightenment and restraint, would give birth to a seductive goddess of witchcraft. But that's exactly who Kurukulla is.

Kurukulla (pronounced "koo-roo-KOO-lei," I think) is the Buddhist goddess of love, wealth, and enchantment. Kuru means "harsh sound," and kulla means "family." Her name derives from her place of residence, Kurukulla Mountain. She was originally an Indian tribal deity, and was also assimilated into the Hindu religion as well. She is a voluptuous sixteen year old girl who is often depicted as having red skin and two pairs of arms. She carries a bow and arrow similar to Cupid's, and wears a necklace made from the fifty severed heads of the fifty negative emotions she vanquished. And she is always dancing.

Kurukulla is especially popular in Tibet (her name is sometimes listed as a Tibetan one) due to her association with enchantment. Buddhists actually do practice magick, which they sometimes refer to as magical actions. There is white magic (calming and healing), yellow magic (prosperity and knowledge), red magic (bewitching), and black magic (destroying evil). Kurukulla primarily deals with red magic. She has the power to bewitch people and make them do her bidding. Since she is also the goddess of love and sex, she is worshiped by people unlucky in love.

Not all Buddhists are celibate monks. Many of them get married and have children. So it would make sense to have a goddess that they invoke to achieve those worldly goals. Buddhists can assume the aspects of a god or goddess through meditation, and then invoke that deity's power and wisdom.

I'm not going to lie, Kurukulla is a bit of a challenge for Westerners to say. And would be extremely unusual in the United States. The sound is beautiful once you get it right. An alternate spelling is Kurukulle, which will help with the pronunciation at least. Some websites list it as a boys name, but I'm not sure if this is due to misinformation. The goddess is very definitely a strong feminine force.

It would be a great magickal name for someone who is interested in adding Buddhist magick into their practice. As a child's name, it would be very bold. And, in my mind anyway, the girl would have to have an exotic, ethnic look in order to support it. But on the right girl, Kurukulla would be a great name.