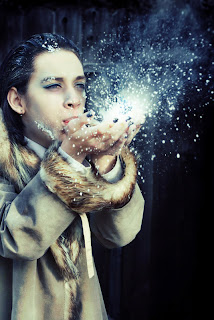 I almost forgot what season it was, because while the rest of the country was covered in snow we in the Pacific Northwest have had almost no snow with spring-like temperatures. I've been itching for full-on spring, with the flowers in bloom and the days being warm enough for me to wear sundresses. But today Mother Earth said, "Not so fast, Issy. It's still winter." And just to make sure there's no doubt in my mind, she left a snowfall during the night. Well, it looks like I'm not leaving the house today.

This reminded me that I have yet to profile the baby name Winter (pronounced "WIN-ter"). The word is derived from the High Old German wintar. Winter is also a common German surname.

The general consensus is that winter symbolizes death. In Greek mythology, the change of seasons is due to Persephone going back to her husband Hades, who is the King of the Underworld. This season is used as a metaphor in many works of literature as well. In the beginning of The Lion, The Witch, and The Wardrobe, Narnia is trapped in a perpetual winter. But there are a few exceptions to this rule. In Persian culture, the first day of winter is called Yalda, meaning "birth," and it is celebrated with a festival.

Winter is relatively new as a seasonal name. It's sisters Autumn and Summer have become new classics, while Spring was a passing fad of the 1970s. But Winter has never actually charted. I've seen it listed as both a boys and girls name, so it's one that could be easily shared by both genders.

Some people with this name have shared the name's challenges. One woman remembered that while growing up everyone would say the name of every other season before landing on Winter. Personally, I don't think that this will be much of a problem anymore. Name diversity is growing all the time, and Winter is really not that "out there."

So if you want a unique name that isn't completely unknown, Winter's a good choice. Hopefully in return, Mother Earth will ease off on the snow. But I doubt it.