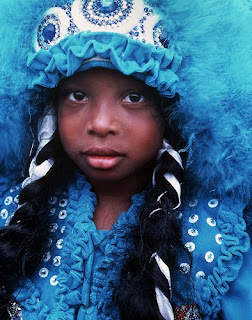 With many surnames now taking the first spot like Emerson, Hunter, and Marlowe, is Laveau out of the question?

Laveau (pronounced "lah-VOO," I think) is a French surname that is very well known in the Cajun region. Try as I might, I couldn't find a meaning. But it's a very important name to Voodoo. To be perfectly clear, Voodoo isn't usually placed under the Neo-Paganism umbrella. But we hang.

Born in 1794, Marie Laveau was the epitome of the mixed-race American. Her mother was half Native American and half black, and her father was half Spanish and half French. Marie was described as a tall, statuesque beauty with dark, curly hair and "good"features (meaning she looked more white than black). She lived in New Orleans, and she is a well known folkloric figure in that region. It is difficult to separate the facts from the fiction when researching her life, but she definitely had a witchy reputation. Along with being a hairdresser to wealthy white women, she was believed to be a gifted Voodoo priestess.

Despite Voodoo's bad name, many believe that she was a charitable woman who was kind to everyone. Others feared her power. Marie told fortunes and created charms and potions. Some say that she had a pet snake named Zombi (after a Voodoo god) that she used to entertain her followers. She is also well known for conducting public ceremonies, allowing the press and and the public to attend, furthering the Voodoo movement in New Orleans. Interestingly enough, Marie was also a devoted Catholic, and added Catholic influences like holy water and statues of saints into her rituals.

Marie Laveau bore fifteen children, seven of which died during the yellow fever epidemic. In accordance with Catholic naming tradition, many of her children also have Marie somewhere in their names. The daughter that goes by Marie Laveau II, who was said to have been the splitting image of her mother, took over the title of Voodoo Queen of New Orleans after she died. Laveau II also became very famous. Many records confuse the two women, sometimes even treating them as if they were the same person.

So does Laveau have the potential to be a first name? I've been having a hard time finding name statistics for specific cities (with the exception of New York City), so I have no way of knowing if it's actually used in New Orleans. But, outside of the black community, I don't really see it catching on. The emphasis on the "oo" sound at the end doesn't scream "white person living in the suburbs" to me. If the parents are really into macabre creole history, then this would be a great fit for them. If it's too out there and you still want to honor both Laveau's, you could always use Marie. Then no one would know the witchy meaning but you.