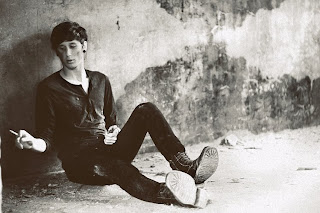 You didn't think I would finish off this lovey-dovey theme week without covering the family name of Romeo, did you?

I'll confess that do have an unfair bias against Romeo as a name, along with many other people. Not everyone immediately thinks of the Shakespeare play when you name a daughter Juliet, but Romeo is a different story. He never quite got away from the "romantic, star-crossed lover" tag. But Montague is not quite so obvious. That makes it a good alternative.

Unlike Capulet, Montague (pronounced "MON-tah-yoo") is a "real" name, but it's definitely not an Italian one. It's a French name meaning "pointed hill." It's much more commonly used as a surname and a place name than something that's considered for the first name slot. But there is a well known Montague that is connected to Witchcraft. Unfortunately, it's not in a good way.

Montague Summers was a Catholic priest who lived during the early 20th century. He was obsessed with Witchcraft, researching and writing extensively about it. His most well known contribution was publishing an English translation of the infamous Malleus Maleficarum, the most influential guide to finding and prosecuting Pagans in the Middle Ages. He believed that all practitioners were servants of the Devil and that they deserved the worst of punishments. Still, in a roundabout way, Summers actually helped Neo-Paganism. Writing these books meant that he had to go out and interview various Pagans, cataloging knowledge that would otherwise be lost today. This lead to him having a bizarre friendship with famous occultist Aleister Crowley.

If you're willing to look past the namesake, you might still run into challenges. I would like to think that Americans are well read enough to know how to pronounce Montague, but you'll probably get your fair share of people saying it like "Mon-tag." Although, this name might appeal to those that want obscure Harry Potter names. Montague is the surname of one of the Slytherin classmates.

I'll admit that Montague has a nice, dignified sound. Maybe a little preppy, even. And it's certainly not one that is overused in the United States. But Mr. Summers lowers the appeal of this name for me, which is a shame. Unsavory namesakes are such a pain.

I got another mention on Appellation Mountain, this time regarding Evander.

Also, I'm not sure that I'm going to make a habit of doing theme weeks. This one felt like homework after awhile. But I want to do a week of names from the Burning Times, so who knows. What do you think?