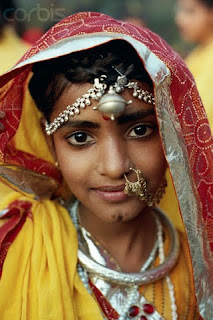 The animated movie Sita Sings the Blues might be the best film you can watch for free on the Internet. I had the pleasure of watching it on the big screen at a local movie festival two years ago. It's tag line was "The Greatest Break-Up Story of All Time." Well, we needed something for the jilted lovers this week.

Sita (pronounced "SEE-tah") is a Hindi name meaning "furrow." It's also a Spanish name meaning "rose." This form derives from the Native American Zuni tribe who originated in what is now New Mexico. Their word for "rose" is zita. But it's the most famous namesake that we're focusing on right now, the Hindu goddess Sita.

The reason Sita means "furrow" is because she was discovered in a furrow of a plowed field as an infant. Because of this, she is thought to be the daughter of the earth goddess. The most famous saga involving Sita is the Ramayana, an epic named after her husband Rama.

In the legend, Sita accompanied her husband into the forest where he is exiled. While there, she is kidnapped and imprisoned by the demon king Ravana. It took months for Rama to find out where she is. He rescued her with the help of his army. When they reunited, Rama greeted his wife coldly. He had doubts regarding Sita's chastity while imprisoned (boo!). She proved her loyalty by surviving a trial by fire. They returned to their kingdom and ushered in an era of prosperity. But it wasn't long before the doubts resurfaced in Rama's mind, and in the minds of his subjects. Rumors spread throughout the kingdom, and Rama decided to abandon a pregnant Sita in the woods. She gave birth to twin boys in a hermitage and spent years raising them by herself. One day, Rama stumbled upon the hermitage and found Sita and his sons. But he was still hesitant to accept her again. Sita, tired of being last on her husband's list of priorities, asked to be taken back into the womb of the earth goddess. Her family watched as the earth split open, accepting Sita into it's depths, never to be seen again. It is because of this story that Sita is beloved in India for being "the ideal wife."

Yes, Sita was a loyal wife. A bit too loyal. Let's face it, god or no, Rama's a crappy husband. If my husband abandoned me in the forest while I was pregnant with twins based on rumors, I'd be actively wishing for his death, not still pining for him. Apparently, I'm not alone. Indian feminists take issue with this traditional portrayal of the "perfect" wife.

In any case, the Ramayana remains a very popular story. There are many reinterpretations of the story from Sita's point of view, similar to how we have novels of the Bible from the perspective of Mary Magdalen. These stories are sometimes called Sitayanas. Which brings me back to Sita Sings the Blues. Film maker Nina Paley used the story to parallel her own unbelievably awful break-up story. Plus her version of Sita looks like Betty Boop and sings songs from the 1920s. How could you not love it?

It's mostly because of the movie that I love this name so much. Otherwise, I might have seen Sita as too passive a namesake for my daughter. Sita has never been a popular name in the United States. I don't know if it's even popular in India. But I think this name has great potential for crossing over to Western use. It's short, sweet, and exotic. It will appeal to those that love Kaya, another exotic name that I'm seeing on babies a lot. If it gets the right push into popular culture, it could easily be a big name.