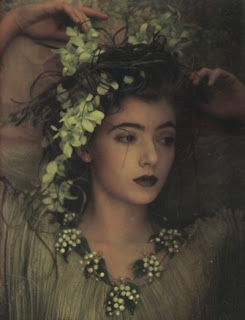 I have to admit, Greensleeves would be an interesting one to find in the playground, but it could be a great option for daring namers.

"Greensleeves" is a traditional English folk song about a scorned lover. It was first marketed in 1580 as "A New Northern Dittye of the Lady Green Sleeves." Contrary to popular belief, King Henry VIII did not write this song in order to seduce Anne Boleyn. The song has an Italian style composition that did not reach England until their daughter Elizabeth was Queen. And it apparently didn't take too long for it to become popular, as it is mentioned in Shakespeare's play The Merry Wives of Windsor.

There are a number of different interpretations of the song. At the time, the word "green" had sexual connotations. This comes from the phrase "a green gown" because clothes becomes grass stained while having sex outside. So Lady Greensleeves could be a promiscuous young lady. She could also be mistakenly assumed to be promiscuous by the song's narrator, which is why he was cast off discourteously. The color green was also seen as a symbol for the lightness of love.

This song is only associated with the holiday season because of "What Child is This?" This song is a popular Christmas carol that uses the same tune as Greensleeves. Recently, it has also been used for a Pagan Yule carol called "Lady Greensleeves." In this version, Lady Greensleeves is the Goddess. You can listen (and purchase) a very good version of this song here. Other modified versions of this song include Leonard Cohen's "Leaving Greensleeves," Jacques Brel's "Amsterdam," and Debbie Reynald's "Home in the Meadow."

Obviously I think this has naminess potential, otherwise I wouldn't have suggested it. Greensleeves would make a great magickal name, and a unique middle name option. But as a first name? I'm not so sure. But to each his own. Greensleeves has romance and love attached to it, so there's no negative association there.

So if you want a uniquely musical name that brings this time of year to mind, Greensleeves just may be you're gal.