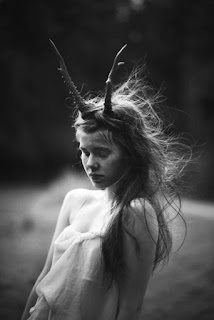 I've had a lot of good luck finding Pagan friendly holiday songs. The Internet is a many splendid thing. One particularly lovely song I found recently is called "Rozhanitsa." That was a new name for me.

The song describes Rozhanitsa (pronounced "roh-jhuh-NEET-sah") as a entity that protects people during the winter months "'til spring breaks through." My first thought was that it sounded like she was a goddess. You can listen and buy the song here.

As it turns out, Rozhanitsa is indeed a goddess. A very obscure Slavic goddess that had a feast day in late December in Russia. She is a winter mother goddess who is depicted with antlers. She gives gifts on her day, and her worshippers gave her gifts of honey, bread and cheese. It was also a tradition to make and give white, deer-shaped cookies. Some Russian women continue to celebrate the Feast of Rozhanitsa.

As I've mentioned before on the profile for Lada, the Slavic pantheon is a bit messed up. There is a lot of confusion, errors, misinterpretations, and downright inventions in scholarly research. You can never be too careful. Some of the gods listed in sources for Slavic Paganism were never worshipped. I'm not sure that there's enough proof that Rozhanitsa is genuinely Pagan. It is believed that her feast day has existed at least since the 1100s, which is hardly Ancient times. I could also find no mention of the name's meaning.

That doesn't stop her from having a lovely name. Rozhanitsa has a lot going for it, I think. One is that Rozhanitsa is a unique way to get to the nickname Rose. It might be a bit long and hard to pronounce at first, but it has a lovely sound once you get the hang of it.

If you want a unique name that's got a great Yuletide carol to go with it, Rozhanitsa might be for you.