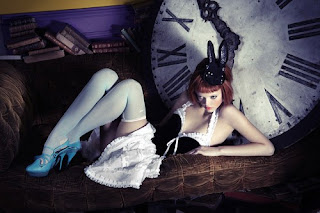 This is a lovely obscurity from Roman mythology, but also happens to be a party member.

Fortuna (pronounced "for-TOO-nah") is a Latin name meaning "lucky" or "fortunate." It's also the name of the Roman goddess of, you guessed it, luck, but also fate. Her name is derived from the name Vortumna, meaning "she who turns the year." This is the earliest known reference to the Wheel of Fortune idea. She is the daughter of Jupiter, and in Greek mythology she's known as Tyche. She is described as being very fickle, one day favoring you and the next day spurning you. She used to be depicted as being blind, like the modern day portrayals of Justice. Apparently, there's nothing Fortuna despises more than immoral public officials, so she saves a special kind of ill-fortune for them. The Romans celebrated a festival in her honor called Fors Fortuna on June 24th.

She was far from being obscure in Ancient Roman times, on the contrary she was reasonably popular. There were quite a few cults that sprouted up in her honor. In early Roman times she was linked to the cult of Isis. When Christianity swept Europe, her influence did not disappear by any means. Many Christians saw her as an agent for God.

You will recognize this name if you're an opera fan. In the cantata Carmina Burana composed by Carl Orff, they open and close with a song about the goddess called "O Fortuna." It is the most famous song from that piece. The music is based off of a series of Medieval poems that cover the fickleness of fortune, the ethereal nature of life, the coming of spring, and the mixed-blessing of lust, drinking, and gluttony. If you've never heard "O Fortuna," which I seriously doubt, you can listen to it with a translation here.

Fortuna is also the name of a character in The Last Unicorn by Peter S. Beagle. She's the Witch that captures the unicorn for her zoo, if you could call it that. She places half starving and miserable animals in tiny cages and puts magic on them that makes the viewers see a much more impressive animal instead. Seriously, what's that about, Mommy Fortuna? Real Witches don't engage in animal cruelty.

Despite all that, there are not a lot of little girls named Fortuna anymore. Well, I'm not sure about Italy, but certainly not in the United States. Which is kind of surprising since fashion is smiling on mythical names at the moment. Fortunata and Fortune are accepted variations, if you like those better.

Fortuna is one of my personal favorites. It's something I can picture using for a daughter, particularly if I had a difficult pregnancy or the child was sick in some way. I could use Lucky as a nickname. Not that I'm actually wishing for that, Gods forbid. But you get the idea. Hopefully fortune will smile on those who have this name.

Image Credit:
Photo by Bruno Dayan via http://www.wicked-halo.com/
Posted by Isadora Vega at 11:21 AM