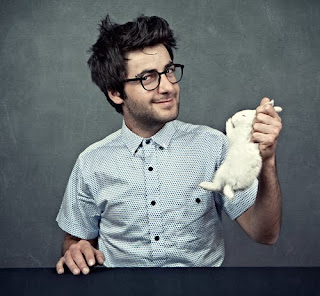 Well I guess I'm supposed to post a link to Pagan Culture if I want the post featured. I thought it was enough that it was a fictional Witch. Magaly, I know it's late, but can you post up Bensiabel? Please? There's not that many male Witches. Okay, there are, but they call them Wizards or Warlocks which isn't technically correct if you're Wiccan.

Anyway, Howl. Fans of anime, and specifically director Hayao Miyazaki's work, will recognize this name immediately. It's the name of one of the lead characters in Howl's Moving Castle. Howl is a Wizard that comes into contact with Sophie, the movie's young heroine. As the title suggests, he has a castle that movies. Picture a steampunk building with legs and a face and you get the idea of what it looks like. Sophie comes to the castle while looking for a way to reverse the curse that made her into an old woman.

Howl is not your typical hero. A Westerner would say that he's metrosexual. He's in touch with his feminine side and is very concerned about his appearance. But at the same time he has a dark side to him, which threatens to take him over because he has no heart. His heart was taken from him. It' up to Sophie to figure out what happened to his heart so she can save him.

Howl's Moving Castle is one of the few Miyazaki movies that isn't the director's original creation. The film is based on the book of the same name by Diana Wynne Jones. Aside from the basic bones of the story, the two versions are very different. Sophie's sisters play a bigger role in the book. Sophie has magical powers, which are not hinted at in the movie. Howl's door leads to a totally different place (trying not to give anything away, so I'm sorry if that sounded cryptic). Howl's apprentice Markl is actually Michael and is quite a bit older. And Miyazaki added the anti-war message that is so prevalent in a lot of his movies. That's just a few of the differences. Personally I prefer the movie version, but I'm a Miyazaki nut.

Because of the movie, I picture this name on a boy. Although I suppose that you could use it for a girl. But the thing is that one a boy it sounds dark and boisterous. On a girl it almost sounds like an insult. I'm not sure what that says about my gender assumptions.

So if you're into fantasy and anime and you want a nerdtastic name, Howl is for you. I'm not sure how many other people will get the reference, though. It might just sound like the kid was really loud when he was born. Or they might think that you're a big Allen Ginsberg fan, as "Howl" is the name of his most famous poem. No matter what, I highly doubt that most people would have come across a little Howl on the playground before.