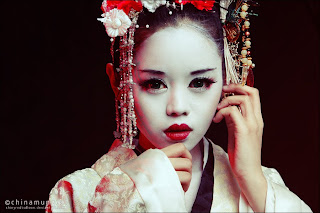 Recently, I rewatched one of my favorite movies of all time, Spirited Away. I got inspired to profile the name of it's heroine, Chihiro.

Like many Asian names, the meaning of Chihiro (pronounced "chee-hee-roh") is dependent on what kanji is used. What all the meanings have in common are "a thousand ____." The most popular interpretation is "a thousand questions," which to me suggest a child that is very curious. As it turns out, this becomes very important to the Chihiro in Spirited Away.

When the movie came out in the United States, it was promoted as a Japanese Alice in Wonderland. The comparison isn't far off. In the movie, Chihiro's parents are driving to their new home when they get lost in a forest. The family wanders into what is obviously a supernatural place, and the parents stupidly eat some food laying out. Which turns them into pigs. Well, it's their own fault!

So Chihiro is trapped in what turns out to be a bath house for the spirits. A mysterious spirit named Haku instructs her on how to get a job at the bath house, as this is the only way to stay and find a way to rescue her parents. This eventually leads her into a confrontation with Yubaba, the witch that runs the bath house.

When Chihiro signs a contract, Yubaba sees her name and comments on how pretty it is. Then she raises her hand, and all the kanji in her name rises up into her outstretched hand except for the character for "one thousand." Yubaba then says that her name belongs to her, and that her new name is Sen. Sen is Japanese for "one thousand." So she takes away her name and gives her a number. Taking away their names is how Yubaba controls the people who work under her.

I have no way of knowing the name's exact popularity in Japan, although judging from the list on Japanese celebrities named Chihiro it seems to be well used. Chihiro is a girls name, but in rare cases it's also given to boys. But most non-Japanese Americans would only be familiar with the name because of the movie.

I'm not one of those people that think that parents should stick with the language of their own race when picking a name. I have a cousin who has a Japanese name but does not even have a little bit of Japanese heritage, and she wears it well. But I'm kind of on the fence regarding Chihiro. On the one hand, it would be kind of cool to meet a blond haired, blue eyed Chihiro. On the other hand...I don't know. What do you think? Could Chihiro cross over into wider American use?